Everything to Know About Police LIDAR to Keep Away From Fines
If you buy something through our posts, we may get a small commission. Read more here.

Everything to Know About A Police Lidar

A police laser (or lidar) gun is generally the device that’s used by traffic enforcers and policemen to measure the speed of cars on the road. It is commonly called a speed gun, but officially, it is called Police Lidar which means “Light Detection and Ranging.” Other types of speed guns are used for professional sports as well, including baseball (pitching speed), tennis (serving speed), cricket (bowling speed), and other speed of athletes. 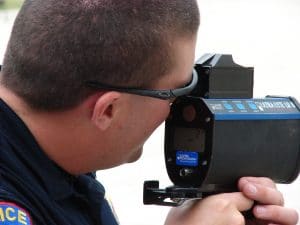 The Police Lidar is an accurate device that gives fast feedback. It’s much easier to use that the older Vascar (https://www.ratedradardetector.org/blog/what-is-vascar/). Upon hitting the trigger, the police can immediately get the speed of the vehicle it is targeting. The gun shoots out a focused beam of infrared that accurately measures speed up to the 10th of an MPH.

How does police lidar work?

People often mix up police lidar with police radar, but these two have different ways of measuring speed, although they have been used by traffic officers as speed measuring gadgets. The police lidar uses an infrared beam and the Doppler Effect to compare the difference in the frequency and then, of course, calculate the speed. A radar, however, sends out a radio pulse instead of an infrared. It then calculates the signal’s Doppler shift to measure the speed.

The accuracy of the police lidar comes from the thousands of time and distance samples that have been taken, as well as the available complex algorithms. It measures time the light makes the roundtrip time to a car and back, which is achieved in less than a second. It’s because the laser light moves 1 ft (30 cm) per nanosecond or 984 million ft (300 million meters) per second.

The laser gun counts how long it takes a roundtrip then calculates the distance of the car using that information. In one second, the police lidar can get many samples and compare the change in distance between samples to get the speed of the car. The ability of police lidar to take hundreds of samples in just a fraction of a second makes it high in terms of accuracy.

Police lidar has been used for traffic law enforcement for a very long time, and although it has been around for many years, it has been updated continuously. The updates were necessary because detectors have been able to easily detect the presence of lidar guns. The newest versions of police lidar were targeted to be more invisible from radar detectors, although the leading ones are still working.

For traffic enforcers, here are some of the advantages of using police lidar over other speed capturing devices: 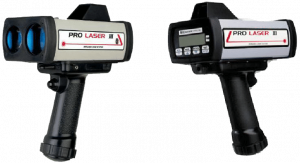 Although these advantages put the police laser/lidar ahead of the radar gun, there are still a few police that uses radar gun and even catch speeders with them. But the laser/lidar gun is much more utilized in many places now.

How Drivers Detect The Presence of a Police Lidar

But aside from radar detectors that can detect laser, people sometimes use laser jammers too. Despite laser jammers being illegal in many states in the United States and many other places in the world, some still try to get away and hide them to lessen their chances of being caught by traffic enforcers. Laser jammers don’t only alert the driver when there’s a lidar gun in the area, but fires back to the police officer jam his LIDAR gun and block it from detecting your vehicle’s speed. 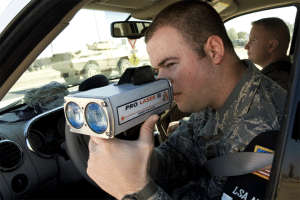 A safer way to know the presence of a police lidar in a particular place is through a community threat-sharing features. Some radar detectors have this feature, which is often accessed and utilized by connecting your device with your smartphone. Some of these community threat-sharing apps include the Cobra iRadar and Escort Live plus a few free apps (tap for our list), wherein drivers can report their sightings of speed traps, red-light cameras, or LIDAR gun.

Police lidar is very effective in calculating the speed of a moving vehicle, and its accuracy is impressive as well. However, although it boasts of an upgrade in the detection department, it still isn’t invisible to radar detectors, especially the newer models. Although there can be advantages on the part of drivers using radar detectors, take note that lidar technology is an ongoing development.

Even though until today, most reliable radar detectors can detect and laser jammers can mess with the police lidar gun detection, there might be a coming upgrade so that the police can easily apprehend those who are speeding and breaking the law. But for those with an advanced radar detector and laser jammers, the security of not being able to be given ticket is higher—but remember that the safest way to not get caught is to no speed at all.