What Is Police's Vascar and Can it Catch Speeding Cars? - RRD.org
If you buy something through our posts, we may get a small commission. Read more here.

VASCAR is an acronym for Visual Average Speed Computer And Recorder. It is a device used for calculating the speed of moving vehicles. The first VASCAR was created in 1966 by Arthur Marshall. The police use the VASCAR in areas where radar and lidar guns are illegal (more about lidar on this page).

If you tend to go fast on the road, you may have already had a radar or laser detector installed to keep yourself protected from unwanted tickets. We know—they are often heaven-sent to drivers. What’s also great about these detectors is that they are not to be undermined for every year we see models becoming better than before, even ones that can be easily concealed: https://www.ratedradardetector.org/blog/best-hidden-concealed/. This, understandably, is frustrating to law enforcement agencies.

They have one weapon in their arsenal that is detector-proof, though. Considered vintage by today’s standards, it can trap you in a problem as results can be difficult to contest once you’re caught speeding through it. That device is the Visual Average Speed Computer And Recorder, or the VASCAR as it is commonly called. And despite its disadvantages, it is something to be concerned about especially that it is regaining its popularity in the age of radar and laser detectors (cheap options: https://www.ratedradardetector.org/blog/best-radar-detector-under-250/). 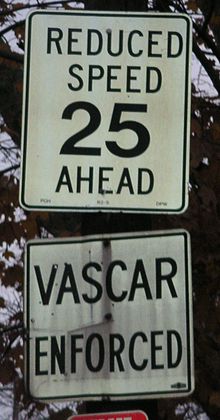 So, what is VASCAR and how does it work?

A little bit of history here. VASCAR is a product of the sixties, so we weren’t lying when we said it was vintage. It was created by a man who goes by Arthur Marshall and was neither a member of the police force nor an inventor before VASCAR. The idea to create such a device came to him in 1966 after watching the police chase down a speeder as he tried to clock the latter with a speedometer. It was both a futile and risky attempt, and in the end, the speeder outran the police.

There must be a way to enforce limits without having to dangerously match a speeder’s pace, right? The VASCAR was Marshall’s answer to that.

The VASCAR is pretty straightforward. To use it, authorities must designate two reference points, and the area in between it will be used to measure the speed of a vehicle. The police will hit a button on the device once a car passes the first point, prompting a timer, and then push it once more when it exits the designated area. It then uses a simple formula to determine the average speed of a suspected speeder: Speed Z=Distance/Time. All this can be done at a distance, and while a patrol car is at rest. The device underwent upgrades through the years, but what it does essentially stayed the same.

Now, you might be wondering why you should be concerned in the face of such a simple mechanism. Here’s the thing: with VASCAR, you have no definite way of knowing that someone is monitoring how fast you are going on the road besides having a trooper approaching and asking you to pull over. As it doesn’t employ radars or similar signals, it will go undetected by your radar detector. The authorities could be concealed, so seeing troopers isn’t enough. And it could be used by helicopters for surveillance on the freeway. There can be certain indicators and sometimes signs that say outright that speed is monitored in the area, but it’s not uniform everywhere. A limitation of the VASCAR could also be a disadvantage for a driver. Because it could only monitor one vehicle at once, one could not use the excuse that there is an error in the emitted signals. This means that the average speed it measures will unmistakably be yours in case you’re apprehended. It will be hard to contest in court.

It’s not all great, however, despite its benefits for troopers. For one, its accuracy of +/-1 has been questioned time and again, especially since the resulting speed is highly dependent on the reaction time of its user. It is possible that a button may be hit too fast or too slow. The environment is not always favorable for the police as well, as heavy traffic, nighttime or the weather could get in the way of surveillance. The average speed is not possible to be consistent the whole time through unless it never fluctuates from point A to point B.

Still, the conviction rate for VASCAR is higher than radar in some states. Because of its capacity for concealment, it is highly unlikely for the device to be retired at this point. The frustration from speeders is only proving the VASCAR’s effectivity. Your only layers of defense are early and precise detection of the signs, crowdsourcing or driving within the speed limit.

While radar detectors are incredibly useful and preemptive, there is a bigger payoff in following the rules especially with VASCAR being employed. Remember, radar detectors are around primarily for your safety—they’re not an excuse to drive as fast as one wishes. So drivers, be safe out there on the road! The possible exorbitant fees are just not worth the trouble.