This year, 16% of drivers will get a speeding ticket, and that’s from actual statistics. If you don’t want to be part of that number, you should consider getting a radar detector. However, you might get awkward looks from police officers once they see that you have one.

If that’s a hard pass for you, we’ve compiled the best concealed radar detectors below.

If you’re a bit tight on budget, you might find the Whistler PRO-3700 an appealing option. This is still one of the radar detectors in the premium spectrum, but of the models in this category, the PRO-3700 is one of the more accessible options. It succeeded in the Whistler PRO-3600 as the brand’s concealed radar detector, but it maintains many of the features that attracted users to its predecessor.

The range is great, but it still falls short compared to other models like the Escort 9500ci. For instance, the PRO-3700 is not as impressive in detecting Ka-bands, which comes as an inconvenience given this band’s dominance on the road. Also, this one has no laser jamming capabilities. The radar detector promises 360-degree protection though, so you’re protected from radar guns in all directions.

In the case of false alarms, the filtering is dependable enough. It has four different filter modes and three City modes which include City 1, City 2, and City NoX. The device also has a Radar Signature Identification or an RSID, which allows a user to know the frequency of the detected Ka-band.

There is also an Auto-Quiet function, which essentially is the same as Escort’s AutoMute. This radar detector can also adjust its sensitivity based on the speed of the vehicle, and it also has an alert priority feature.

There are a few more things that make it stand out: you can select Spanish as the device’s main language, and you can install it in more than one way to maximize its features. Whistler also gives a five-year warranty, which is not often offered for equipment of this kind. 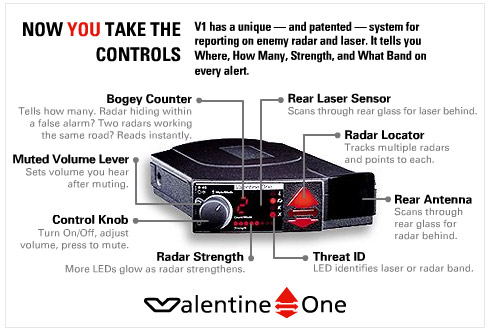 One of the highest-rated radar detectors around, the Valentine One offers protection from both radar and laser signals. It can even tell you the direction of a threat based on its directional arrows — a feature that was patented by its manufacturer and was only allowed to be adopted by the competition in recent years.

This radar detector makes it to our list because it can be installed in a way that would keep it out of the sight of onlookers. It could be mounted in your windshield with fewer cords as well. It’s not explicitly advertised that way, but you actually could do this with a few modifications.

The device has been held in high esteem because of its impressive range, a feature that has been praised even with the arrival of newer models in the market. 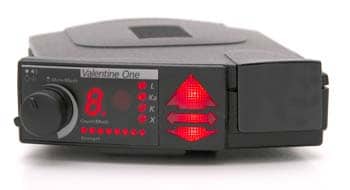 In our tests, the Valentine One has been able to display flexibility in most driving conditions, save perhaps for the City mode. Its sensitivity to the most common bands is likewise lauded, but it may not be the radar detector of choice for new users given its classic or dated design.

The absence of GPS also puts off more experienced users, especially considering the benefits that GPS brings, among them better false alerts filtering, speed measurement, and locating speed traps and red-light cameras. Valentine One has no digital signal processing technology to speak of as well, which is another of its cons.

Despite that, this model still has an edge over others because of its directional arrows. This function allows you to deduce the location of a threat. It enables one to be more aware of where they are driving, and act accordingly should the situation need it.

A more recent model, the Escort Max 360, now has directional arrows. And while it outperforms this device in our tests, the Valentine One is still highly dependable. Plus, an updated version of the detector now allows for protection from RDDs.

If you have a limited budget for a new radar detector, take a look at these great detectors below $300. On the other hand, if you want to be protected from traffic cameras, this one will do the trick.