Although radar detectors are legal, cops still use radar detector detectors (RDDs) to know if you have one. And if your detector doesn’t have cloaking capabilities, it’s easy for the police to give you a strange look. The question is, are you willing to accept that vulnerability?

We hope not. So, we’ve compiled the best stealth and undetectable radar detectors below.

The Escort Redline Ex is currently touted as one of the best radar detectors in the market today. There are two reasons for this.

One, this is the closest we can get to a completely undetectable radar detector. And two, the Redline Ex boasts of one of the longest tested ranges of radar detectors currently available in the market.

The Redline Ex (as well as its predecessor, the Redline) sets itself apart from the Escort roster with its proven claims of undetectability. In fact, the Redline Ex has TotalShield RF technology, a patented feature by Escort. This is what keeps this device undetectable by RDDs such as the older VG-2 and Spectre models including the Elite.

So while most radar detectors have little to no means of going invisible against powerful RDDs like the Spectre, this one can handle it.

But just to be clear, all states in the US besides Virginia and Washington DC allow the use of radar detectors. Still, many mid-range devices have cloaking against the once-standard VG-2.

As mentioned, the Escort Redline Ex also holds the record for one of the longest ranges around, and so does its older brother, the Redline. Both can go as far as more than 14 miles, which is dependent on driving conditions but still impressive nonetheless.

In addition to detecting most common signals such as Ka and X, it can also pick up international K bands such as Gatso, Strelka, and Multaradar CD/CT.  What’s more, it can also detect laser signals in all directions.

Performance is at par with the older Redline model, although the Ex edges it out in two areas: false alert filtering and protection against red-light cameras and speed traps.

Furthermore, it boasts a list of useful features including GPS, AutoLearn technology, Bluetooth, Escort Live app connectivity, and IVT filter. What it does lack are Wi-Fi and directional arrows, which are considered luxury additions but are present in the upgraded Redline 360C.

Uniden’s entry, the R3, doesn’t officially claim to be undetectable by Spectre models. However, many tests have proven that it can do so, even with the Spectre Elite.

However, results in our tests have not been consistent. Still, its cloaking abilities against RDDs are still more than what other models can offer. And often, the signals emitted by the R3 have only been identified in very close ranges.

That said, the Uniden R3 was not promoted for its ability to go invisible. Instead, it’s commended as one of the best radar detectors for its great overall performance, together with its non-GPS brother, the Uniden R1.

Many top-of-the-line radar detectors claim things that the Uniden R3 can actually deliver consistently. Among these is the increased sensitivity of the device against radar signals. Its accuracy is also great in both city and highway driving modes, so much so that it has earned the rightful comparison of being as good as the veteran Valentine One.

Another thing that makes the R3 stand out is its impressive range, which can detect even twice as much as other flagship rivals without the hefty price tag. Detection goes at 360 degrees, making alerts more accurate and swift.

The Uniden R3 also excels in filtering false alerts through the adjustment of sensitivity for particular radar signals. Still, the Uniden R3 doesn’t compromise its efficiency despite reducing its sensitivity in the city.

Additionally, Blind Spot Monitoring (BSM) systems are also addressed by the Uniden R3, allowing users to have a quiet drive even in the presence of vehicles from Honda, Acura, and GM. It also gives advanced alerts on radar guns, cameras, and speed traps due to a good GPS chipset.

One of Escort Redline’s faults is not being able to maintain its accuracy when the bands are segmented. Still, this is a reliable rig to have on the road.

The Radenso XP may not be at the top of Radenso’s offerings, but it can shield you against RDDs as far as 14+ feet. Specifically, it is completely invisible against the VG-2 and nearly undetectable by the Spectre[1] Elite.

But like the two previously mentioned products, its capabilities go beyond its ability to be undetected by RDDs. When this radar detector was released, it also boasted of long detection ranges as well as effective filtering of false alerts.

Currently, the long detection range may be off — after all, this has already been eclipsed by newer models. It’s still good enough for the average user though, especially for the price. (For other worth-the-money radar detectors, check out our review of the best radar detectors under $300.)

In our tests, this device proved great on the highway, with some results tying it with the Valentine One. In other city modes, however, the Radenso XP did not yield as impressive results.

Laser guns can be detected as well, but as with other models, they are not as helpful because such signals are instant and provide no time for adjustment of speed.

But when it comes to suppressing false alerts, the Radenso XP is among the better ones. This is due to the effective adjustment of sensitivity for independent radar bands and segmentation for 10 Ka bands. As most states only use three of these bands for their equipment, all the others can be switched off with little fear of missing genuine threats.

The Radenso XP also has GPS, which makes users aware of the speed and red-light cameras. It can also store 200 locations that could be ignored should the vehicle pass by them.

When it comes to usability, this radar detector can trip up new users. Although the labels are legible and complete on the exterior of the Radenso XP, using it is a different matter. The operation is easier for those with previous experience in radar detectors, and even then, one may need to consult a manual. 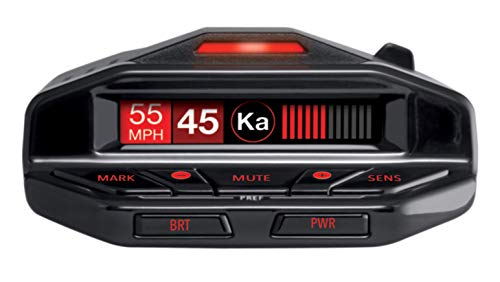 There are many features that radar detectors can boast of, but when it comes to undetectability, the true winner is Escort Redline Ex. Aside from its bells and whistles that place it among the best radar detectors, the Redline Ex can hide from almost all common RDDs. Even the toughest Spectre models can’t detect it—something other detectors just can’t guarantee.

William
William Johnson is the owner and founder of RatedRadarDetector.org. He writes about car accessories, with his passion stemming from a deep enthusiasm for all things automotive. His website, RRD, focuses on in-depth reviews of car accessories to help people find the best and latest products in the market.
Latest posts by William (see all)