Best Place To Mount Radar Detector To Avoid Violation (2020)
RRD is reader-supported. When you purchase through links on our site, we may earn a commission. Read more.

It’s great to have a radar detector mounted inside your car to warn you from a possible speeding ticket or traffic violation. But there are questions you might want to ask regarding its placement and performance.

Among those questions are, “Where is the best place to mount a radar detector?”, “Should I place it higher or lower?”, and “Should I place it on the windshield with suction cups, the rearview mirror, or just on my dashboard?” And while ultimately, you get to decide which position would be best suited for your convenience and needs, you should keep in mind that a radar detector must be mounted in the right place for it to maximize its function.

Why you must find the best place to mount a radar detector?

If you make a mistake in mounting your radar detector, the device may not be effective at all. But this step can be tricky, due to the fact there are no specialists who you can contact for mounting advice. Most drivers, if not all, mount radar detectors by themselves.

In some cases, the radar detector comes with a detailed manual dictating the best place to mount it. However, some devices don’t have this type of manual.

In general, you can mount a device in different places, but, what is the best place to mount a radar detector? Here are your possible options as well as their advantages and disadvantages:

Center of the windshield

To detect your speed, police use laser guns and radar guns, which uses a radio signal that targets your car. The weight of the signal at 1000 feet is 85 feet, that’s why manufacturers often suggest the middle of the windshield as the best place to mount a radar detector. However, this position has some drawbacks.

With a driver’s visual not at 100%, driving won’t also be 100% safe. Another problem with this position is that some states don’t allow any gadget to be mounted on the windshield (read: laws on radar detectors). Hence, your radar detector might be the cause of your violation ticket.

Your radar detector will often be exposed to the possibility of the thief, especially when you leave your car alone in a parking lot and your device is up on your windshield for everyone to see. It’s the same reason that makes your detector hard to hide from police officers as well. 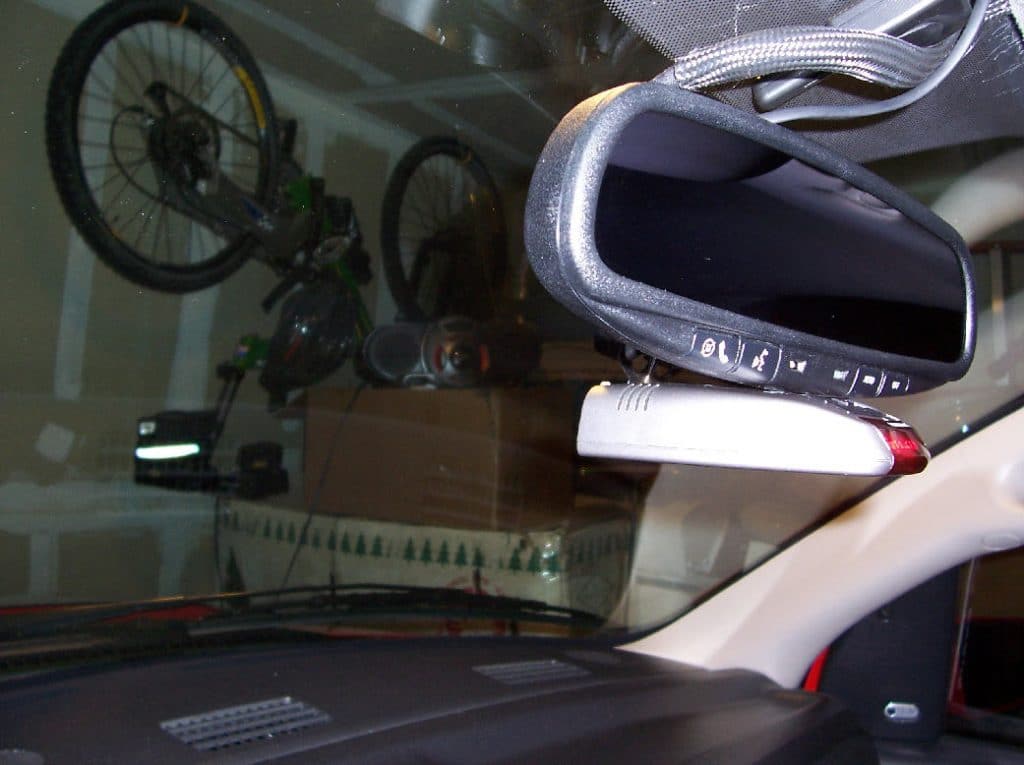 High on the windshield

Compared to having the radar detector on the center of the windshield, having it up high or close to the rearview mirror can improve the driver’s view while driving. Also, it allows easier and faster pickup of traffic radar.

However, mounting the device on a higher position means that its power cord has to travel through the line of sight of the driver. It may be better than having the actual device blocking the driver’s vision, but it still can be an eyesore. Also, this position still makes the radar detector easily detected by both thieves and the police.

Low on the windshield 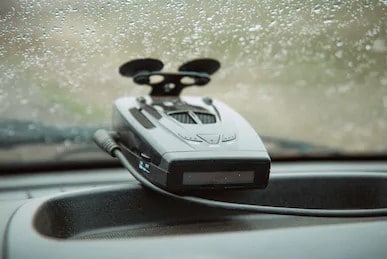 First, there will be no obstructions in your driving vision while you will have easy access to the controls. The radar gun beam will be detected much smoother too, while the device won’t be too much of an easy target for thieves or police officers.

Having your radar detector low on your windshield is the best place to mount it because it allows your device to alert you as soon as possible, too. Even small adjustments can cause improvements or severe drawbacks.

In the chart below, you can see how different mounting positions affect the alert distances and why positioning the radar detector low on the windshield is the best option. Tested radar detectors are Valentine One and Escort 9500i. The distances are in meters.

Best place to mount a radar detector designed to be concealed

There are radar locator devices that are designed to be hidden or concealed, which means they can be mounted on places where the conventional detectors won’t usually be. Their advantage is usually their small size, which means they can be easily covered. The best place to mount a radar detector that’s easy to be concealed is behind the steering wheel or low on the main console.

You can also opt to cover them with something or place them on the sun visor. (The sun visor is a great mounting place, but if you keep important documents there, there is a possibility of a police officer seeing the device when you are asked to pull over.) 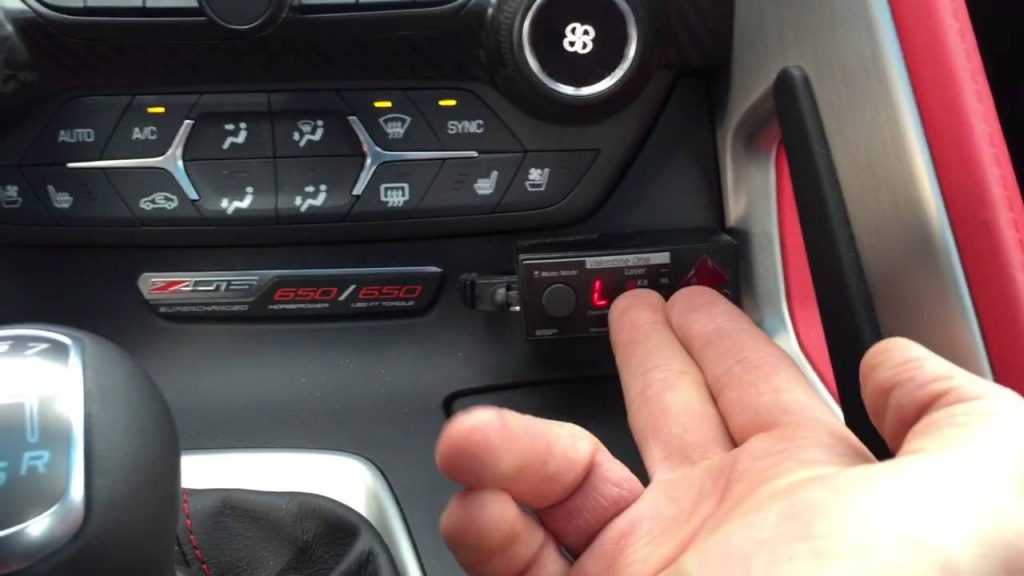 A permanent radar detector installation comes in handy when you want to avoid thieves from easily taking your device. Permanent installation can be time-consuming, yet it’s worth the duration because it cannot be removed easily.

This process requires drilling holes to mount the sensors (make sure your device is in sync with your car’s turning on and off to prevent battery drainage).

Another advantage of this kind of installation is that it clears up the driver’s vision compared to windshield-mounted models because all the cables are hidden in the body of your vehicle.

There will be no cords hanging across your face like windshield-mounted models. However, permanently mounted detectors pose a problem on the radar beam detection—they don’t easily catch signal beams that aren’t directly pointed on the car.

Remote mount in the grill 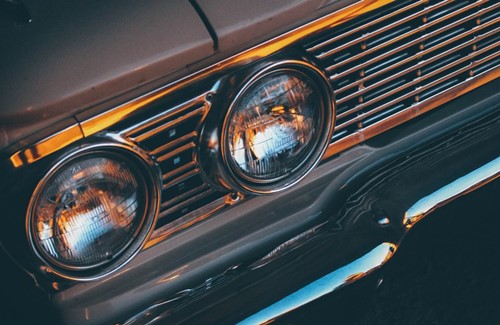 There is an option to avoid the windshield and rearview mirror to mount your device. Your device can be mounted remotely on your car’s grill area, but it can be done through custom installment.

But although this solves issues of visibility and visual blockage, putting your radar locator gadget on the grill would need a lot of money and professional help. Additionally, you wouldn’t want to do a permanent installation like this when you’re using a car on lease.

Other pointers when installing your radar detector

Color of your vehicle

It isn’t a well-known fact, but the color of a car should be taken into account when choosing the best place to mount a radar detector. Vehicles that have darker colors should use a radar detector mounted low in a car, to detect the radar gun beam sooner.

On the other hand, vehicles with brighter colors should have a radar detector mounted on a high position, to detect radar gun as soon as possible. Both of these apply in cases where you don’t have a radar jammer.

But remember that there are strict laws on radar and laser jammers prohibition. If a police officer sees that you use a jammer, you can expect a ticket and your radio jammer will be taken from you!

It might be quite a simple detail to pay attention to, but where and how your radar detector is pointed matter. Apparatus like radar detectors functions directionally, so you wouldn’t want to be pointed up to the sky or towards the ground—there wouldn’t be any radar beams there. To ensure that your device will have maximum detection, it should be pointed straight ahead.

After taking into consideration all of these factors, advantages, and disadvantages, the main question you should answer first is, “What is my main priority and goal in mounting my radar detector?” If you’re too keen on having the gadget near you for accessibility and use of driving detector apps (read more), install it on the windshield.

If you want to be sure of concealing your radar locator, buy one that is designed for concealment or install your usual device on the grill of your car. Accordingly, if you hate cords hanging down from the windshield, you should opt to permanently install the detector.

Weigh in your priorities and options properly to make sure your speeding ticket-avoider will be placed on the best place to mount a radar detector. This way, you’ll get the full benefits of the gadget that will save you from countless traffic violation tickets and fines.