If you’re looking for an alternative to radar detectors apps, that will let you drive fast and safe, without paying over $100, click here

What are radar detector apps exactly, and what’s the best one out there? Here, we discuss everything you need to know.

Our Recommendations for the Best Radar Detector Apps:

Reliability, dependability, and accuracy are the strong suits of Escort Live. Exclusive for Escort radar detectors, this radar detector app guarantees a credible source of info for real-time trap sightings on the road.

The app itself is user-friendly, and even connecting to an Escort Live-compatible radar detector is trouble-free. Just press the Bluetooth icon located at the top right part of the screen, after which it would prompt you to choose the radar detector you are using. It will then automatically connect and integrate the data between your smartphone and the radar detector.

As for the display, the Escort Live app has one of the best-looking interfaces we’ve seen. It shows spotted law enforcement markings on the map, plus an overspeed warning that’s easily visible onscreen.

At its most basic, this radar detector app detects red light cameras and remembers locations of false alerts for future drives. The app also indicates speed limit information depending on your location, and automatically uploads live updates on radar and laser data to its cloud server. The Escort Live App also provides topnotch accuracy, mainly because it can collate uploaded data from different actual drivers within a certain area. With more users updating the app, the more accurate the information every driver can source from it, especially in avoiding law enforcement traps along the way.

While the Escort Live is available for free, you can add more features by purchasing a premium subscription at $49 a year, or $4.99 a month.

If you need an application that features dual function driver use, Waze is a good choice for iOS or Android smartphones. The concept of Waze isn’t unique, but it removed the problem most radar detector applications had, which was high battery consumption. This means Waze won’t drain your smartphone’s battery, and consequently won’t leave you stranded in the middle of nowhere. 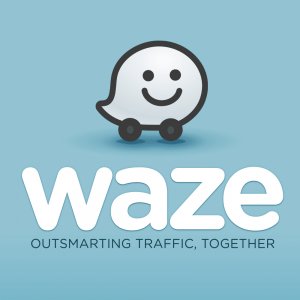 Waze has a clean and basic user interface that makes it the primary choice for drivers who value easy navigation. What’s more, it can function both as a GPS navigation tool and a radar detector app. Waze can also locate law enforcement officers and radar guns. This feature has become popular with many users, and some even call it the Cops-Near-Me app. While using GPS, Waze allows users to tag locations of parked cops’ vehicles, traffic cameras, congestion, accidents, potholes, and more. This subsequently warns other radar detector app drivers when they’re close to these positions.

Waze is an entirely free radar detector app, so all you have to do is download it on your smartphone and you’re good to go. Out of all similar radar detector apps, Waze is the most affordable and it also delivers high accuracy. Through it, you’ll receive real-time alerts on traffic jams, turn restrictions, one-way streets, construction sites, accidents, hazards, and law enforcement traps. Regarding safety, the app will detect your driving speed and will warn you when you’re going above the designated speed limit.

However, it’s important to note that Waze doesn’t come with a separate radar detector. It functions solely based on the information gathered from your phone and the cloud.

If you’re not willing to spend a couple of hundred dollars on a radar detector application, you’ll want a free app that is at par with Waze but also works in conjunction with speed camera detectors. We recommend Radarbot, a great radar detector app that is available for download on both Android and iOS smartphones. The straightforward interface incorporated in Radarbot makes sure you avoid receiving one of the 41 million speeding tickets given out by officers yearly, and that’s in the United States alone. 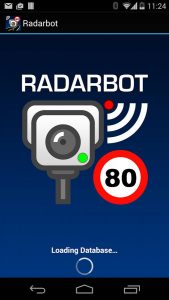 Both Radarbot and Waze don’t have to rely on a radar detector to alert you of traffic conditions, and both are conveniently accessible through your iOS and Android smartphones. But if you’re wondering what the main difference between the functions of Waze and Radarbot might be, the answer is simple: Radarbot is the only radar detector application that combines real-time traffic alerts with the most high-tech speed camera detection system. This relies on GPS to get you to where you need to be in a safe and timely manner.

Radarbot can provide information regarding navigation, traffic, and speed cameras to make your drive easy and quick. It’s also among the fastest radar detector apps with one of the largest radar detection communities that work together to ensure every driver’s safety. And with over 2 million drivers updating Radarbot, you know that you have the maximum amount of information available on the road you’re on.

If you want a radar detector app whose primary function is to detect hazards present on the road, you should look into Speed Camera Radar. 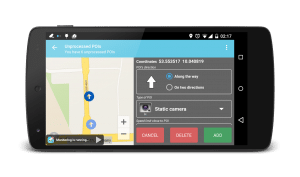 This app works differently from hardware radar detectors since it relies on a database of road hazards reported by other users, and provides you with live alerts. The app itself supports 3D design features and can detect police cars, speed cameras, mobile ambush, red light cameras, and static speed cameras nearby. Speed Camera Radar also has its own system that sorts different radio frequencies, just like a tangible radar detector would.

In our experience, this app effectively uses the Internet to make sure you stay on top of road hazards, and encounter as little to no traffic as possible. It also has the advantage of functionality even when overseas, being one of the few radar detector applications that can be used in every single country in the world. That is certainly a plus for frequent travelers.

Speed Camera Radar won’t drain your smartphone battery as well. Unfortunately, the only drawback here is the amount pesky ads. But of course, that makes up for the app’s zero price.

Like the previous apps we’ve reviewed, the Cobra iRadar is an app that costs absolutely nothing but doesn’t skimp on radar technology functions. As such, it’s a great choice for those who aren’t on board with dropping absurd amounts of money for a radar detector application. 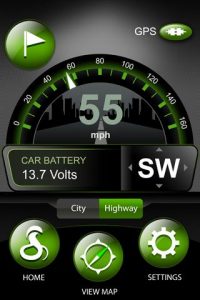 Out of many traffic apps on app stores, Cobra iRadar sets itself apart from the rest by taking pride in its ad-free platform, which makes a massive difference when it comes to the amount of time spent using it. Cobra iRadar supports iOS and Android smartphones, although some features within the radar detector application require a compatible Cobra radar detector. Another unique thing about this app is its calendar integration, which gives you automatic access to driving directions relevant to events and appointments that would have been missed otherwise.

Overall, Cobra iRadar is a free program that guarantees relevant information regarding routes, parking, and traffic for an easy and quick drive.  It also provides constant updates on new policemen locations, hazards, and accidents, which work in your favor especially when it comes to preventing yourself from getting your first speeding ticket.

If you’re one of the drivers out there who prioritize design and user compatibility, Glob is the best radar detector application that has both features. What’s more, it won’t cost you a dime since all you need is either an iOS or Android smartphone. 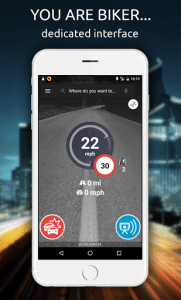 Glob delivers the latest information on car navigation and traffic, providing you with the best route possible. It also gives real-time alerts on driving hazards and speed cameras. Glob does this even while running on the background, and more impressively, in 2D and 3D maps. This allows you to gain as much information about the area as you need.

The app also keeps track of what’s on the road while you’re driving. As such, it’s simultaneously contributing to the Glob – GPS, Traffic, Radar & Speed Limits community even when the app is just running in the background.

Currently, there are over three million drivers who depend on and contribute to the app, adding credibility to the community. It helps drivers navigate their way to work as well as complete daily errands. For those going on a road trip, the Glob app is reliable to have.

What Can Radar Detectors Do?

Radar detectors offer drivers convenient protection in an affordable manner that can prevent speeding tickets and other driving hazards.

They work by sensing particular signal frequencies and they alert you when such frequencies are present. They cannot precisely detect law enforcement vehicles or officers, but only the signals coming from the devices the officers often use to track car speeds.

Some radar detectors are so advanced that they can track speed cameras that are responsible for detecting drivers going above the speed limit.

As smartphones became a staple item in an individual’s life, it’s no surprise that people came up with the idea of integrating a radar detector with a smartphone. Even though normal radar detectors do work perfectly fine, mobile apps have become increasingly popular.

As a side note, there are radar detectors that you can hide in your car and easily connect to your smartphone via Bluetooth. This means you can access all the information from radar detectors by effortlessly looking at your phone.

Just note that radar detectors with smartphone compatibility are more accurate, but they end up costing a lot of money.

All of the radar detector apps reviewed above are proven to significantly reduce your chances of getting a driving-related ticket, but it’s incorrect to assume that since you have a radar detector application, you now have the liberty to speed with ease without any consequences.

Since each of the radar detector applications focuses on using a smartphone, you’re less likely to get a ticket when compared to radar detectors that lack the smartphone compatibility feature. But which app tells you where cops are with the best accuracy?

Out of many traffic apps on the Playstore and Appstore, Waze is the best radar detector app of 2020 because it provides ample road information at no cost to the driver. If you’re a safe driver who rarely gets tickets, Waze will be perfect for your driving needs without needing a separate detection device.

Modern radar detectors have come a long way in terms of design and technology. In fact, radar detectors were first only utilized by the military for operation purposes. But nowadays, radar detectors are accessible to more than just government officials, but private citizens as well.

The standard radar detector is ergonomically designed with the latest technology to include Bluetooth connectivity, smartphone integration, and GPS to give you ultimate control when driving. These radar detection technology innovations have made the detector readily available, making it hard to figure out the best cop radar detector app that’s best suited to your driving needs.