Buying cheap radar detectors is both tempting and tricky. Your wallet might not suffer at first, but when you purchase an unreliable device, the fines you’ll pay for a speeding ticket would’ve been enough to purchase a mid-range detector.

Still, that doesn’t mean cheap detectors are a total waste. After rigorous testing, here are the best cheap radar detectors under $100:

One of the more advanced radar detectors from Cobra, the Rad 480i features front and rear antennas, giving you 360 degrees of protection from radar devices. Wherever the signal is coming from, this model can alert you instantly.

As for false alarms, the improved IVT filter eliminates alerts that come from garage doors and microwaves. The Cobra Rad 480i also features adjustable sensitivity, which you can access from the built-in control panel. If you’re driving in the city, this helps filter out false alerts.

Even if it’s a pretty cheap model, this radar detector supports Bluetooth so you can sync your device with your smartphone. This then gives you access to the iRadar app, where you can receive and send alerts to fellow Cobra community members about law enforcement locations as well as speed and red-light camera spots.

Overall, the Cobra Rad 480i is an intuitive device for detecting radar signals. If you want to improve its performance, you can update the software as well.

Another cheap radar detector, the Cobra iRad is a popular one from Cobra Electronics. One of the features that make it stand out is the bright white OLED display. In our experience with this radar detector, the details of the band and signal strength remain clearly visible in any lighting condition, making night driving easier.

The setup is also pretty easy, especially since everything you need is already in the box. It’s also simple to figure out where all the buttons are, but a main difference from other Cobra products is the orange report button.

You can also get bilingual voice notifications (English or Spanish) on incoming traffic deterrents.  This way, you’re alerted without taking your eyes off the road.

With Bluetooth connectivity, you can also sync this Cobra radar detector with your smartphone and use the iRadar app. As mentioned, the iRadar app gives you access to real-time updates on the road, whether it’s law enforcement locations, road blocks, or other hazards. This is made possible by a large community of users who regularly upload information on the app.

The Uniden DFR1 is also one of the cheapest yet reliable radar detectors that we’ve tested. It’s accurate, has a decent range, and the false alerts were kept to a minimum as well.

For something that costs under a hundred bucks, the Uniden DFR1 performs almost as well as its expensive brothers, the DFR6 & DFR7. However, it lacks traffic sensor filters. Then again, it does the job of giving alerts to the user through its audio alerts. Plus, it also determines what band range the signal is coming from.

On the display, you’ll find the type of frequency detected, whether it’s X, K, KA, or L (which stands for laser). Other than that, it also has a signal strength meter that indicates how weak or strong a signal is from 1-5. This way, the driver can know how near or far the source is.

On the whole, the Uniden DFR1 is a decent radar detector for any driver on a budget. A speeding violation can be expensive, and this device can help you avoid that.

Equipped with Whistler’s first-class quick signals detection, this is a powerful detector that can last you years. So while there aren’t many radar detectors under $100 that can do the job, this Whistler model is something that does.

The CR75 can detect radar detector signals quickly, whether it’s from the X, K, or KA bands. . In fact, the number of radar bands that can be caught by this model is quite impressive. Once it alerts you of the threat, you can promptly react by slowing down so you’re not caught.

Whistler CR75 is an excellent choice for the countryside as it features superior range when compared to other models in its category and price range.

In our tests, this radar detector was easy to use. The blue LED display was easily readable whether it’s day or night, so there would be no issues in that department whatever time of day you’re on the road.

Plus, it has an adjustable volume that lets you control how loud or soft an alert is. Not all radar detectors offer you this option, and that can tend to get annoying for any driver.

However, what most of the users noticed, including us, is that this Whistler model is superb at recognizing false signals. Also, while some of the newer bands are more difficult to pick up, they are much easier to spot with this radar detector.

If you want a radar detector that is versatile, modern, and useful, this product is a great purchase that’s worth your money. You can either purchase it on Amazon on Walmart, and it also comes with a clip mount, windshield mount, and power cord. 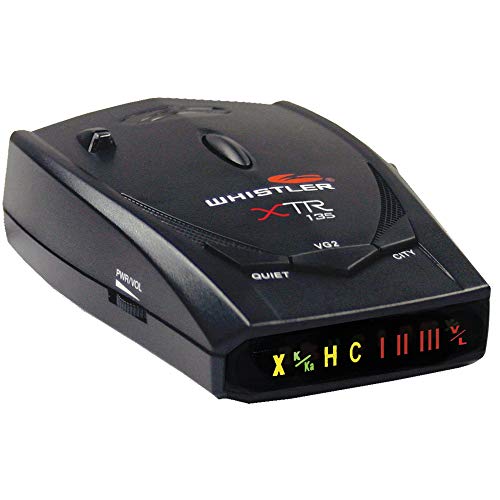 Design-wise, the Whistler XTR-135 radar detector is more compact than others. But don’t let the small size fool you; this one packs enough power to give you a reliable performance on the road. Plus, unlike others at this price point, this radar detector has stealth mode if you want to avoid curious stares from cops.

Even if it’s affordable, this pocket-sized device provides total band protection from all laser and radar signals. You also get full coverage on all sides of your car, thanks to its 360-degree protection. It also has a signal strength meter as an added feature.

Guaranteed, this radar detector will pick up those hard-to-detect signals whether it’s coming from the front, rear, or sides.

Like most cheap radar detectors, the Whistler XTR-135 has a City Mode and Highway mode. When you’re driving on the highway, sensitivity is increased so you’re alerted immediately if there are radar or laser guns targeting the area. On the other hand, City Mode lowers the sensitivity level when you’re driving in the city to avoid false threats that can make your radar detector go crazy.

This radar detector also conveniently comes with a volume control option. Honestly, we don’t know why many radar detectors to this day still don’t incorporate this simple function. Controlling the volume is handy if you don’t want to be bombarded by loud alerts while you’re on the road. If you want a quiet drive, you can mute your radar detector as well.

Overall, this is a small radar detector that can deliver a performance at par with bigger radar detectors in the market. If there’s a reason to complain, it’s the smaller icon display. It does take a while to get used to, but the small display is pretty much expected given the size of this radar detector.

Nevertheless, it’s cheap, small, and provides superb coverage, making it an excellent radar detector with a price tag under $100. For those with a higher budget, topnotch radar detectors priced at $300 are great options, too. 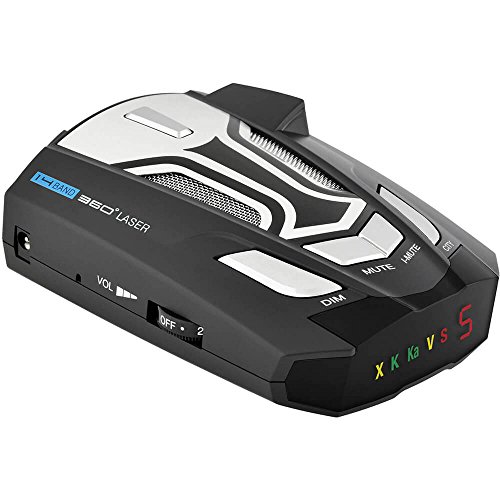 If you want the best value for your money, the Cobra SPX 955 is tough to beat in the under-$100 department. Its design is more compact than other units in the SPX line. But more than appearances, the Cobra SPX 955 delivers reliable performance too.

There are two ways to get alerts on this radar and laser detector: through the display or through audible alerts. In our drives, the UltraBright Data Display on the SPX 955 is easy to read whether day or night. Plus, you can adjust the brightness from “bright” to “dim” to “dark. If you’re going stealth mode especially during night driving, switching to dark is useful.

You can set up the Cobra SPX 955 to emit voice or tonal alerts. Such unique tones and readouts help you know what’s going on even without glancing off the road – a safety feature as well.

The Cobra SPX 955 detects both radar and laser for ultimate protection against speeding tickets. It detects X, K, Ka, and even the less common Ku bands. It’s also instant-on ready so you won’t be caught off guard by hard-to-detect POP guns. This is extremely useful since a fast response from your radar detector is crucial for you to have ample time to reduce speed on the road.

Armed with Xtreme Range Superheterodyne Technology (it’s a mouthful, we know), you get lightning-fast detection and extra range so you’re warned as early as possible when there are threats around. Moreover, you’re protected against VG-2, Spectre I and Spectre IV+ RDDS for undetectability.

To handle annoying false alarms, the Cobra SPX 955 has several features in place. One of these is the IVT filter system which reduces false threats coming from sources such as collision avoidance and cruise control systems.

The other features are IntelliMute and IntelliMute Pro. The former is a mute function that lessens false alerts depending on your set engine RPMs, while the latter prevents detection by RDDs when you’re traveling at slower speeds.

With all these bells and whistles, the Cobra SPX 955 has a great feature set even at under $100. If you want a radar detector that’s affordable yet equipped with advanced features, this is an excellent choice.

If you want the best cheap radar detector around but you don’t want something unreliable, this guide gives you some of the most solid options in the market. If you a little higher budget, check our under $200 series. Radar detectors in this range have added features like detection of red light speed cameras and directional arrows.

Want to see the new and the best from Escort? We covered the Redline 360C here.

Among all cheap radar detectors that cost below $100, Cobra’s RAD 480i emerges as the winner. It provides front and rear protection, iRadar app connectivity, LaserEye technology, and IVT filter systems to give any user the best performance for its price.

False alerts are diminished by this device as well, all while making sure there’s proper detection of real threats to help you avoid speeding tickets. Aside from all its functions, it’s designed with a sleek external case, complete with stylish buttons and a low-key display screen that won’t draw unnecessary attention.

With these amazing features, RAD 480i takes the title of the best overall radar detector under 100 dollars.

William
William Johnson is the owner and founder of RatedRadarDetector.org. He writes about car accessories, with his passion stemming from a deep enthusiasm for all things automotive. His website, RRD, focuses on in-depth reviews of car accessories to help people find the best and latest products in the market.
Latest posts by William (see all)