The Cobra 0180003-1 is an advanced and modified IRAD Cobra radar that has a lot of superiority and improvement over its predecessors. Unlike your old traditional radar scanners, this one uses built-in technology to detect more than just policing radars to help you catch speed traps, it even taps into your mobile network to help detect traps from over a mile away.

There’s a lot of functionality built into this radar detector and it has a pretty top-quality scanner so is it worth the purchase and does it work as promised? 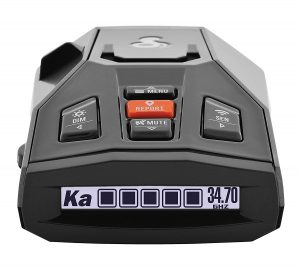 Design
Operating at 34.70 GHz, the overall design for this scanner is relatively small and it fits in any kind of dashboard setting, no matter where you mount it. It’s smaller than some of the other radar scanners we’ve seen so that’s a plus on the design end.

It doesn’t have much to visually look at, which is a good thing because too many radar detectors on the market are designed to give you visual information which takes your eyes off the road. Instead, this detector uses voice prompts to alert you of when you should slow down.

One of the biggest problems with a lot of other radar detectors is false positives. It’s not uncommon to get a false positive from say a garage door or someone’s home security system but instead of that, this radar detector is equipped with a fail-proof circuit that greatly reduces that. This is great for people who live in high-value neighborhoods where everyone has a home security system.

If you’re tired of listening to the thing talk or you want to the mute the audio for other reasons, it can go into mute mode. It’s great for if you have passengers in the car and you don’t want to annoy them with the constant prompts and it’s great if you’re on the phone trying to have a conversation. You’ll get pretty much no audible feedback if you turn on mute mode.

This thing can operate completely by voice, instead of giving you visual prompts like a lot of other radar detectors on the market, so you don’t have to take your eyes off the road and unlike other radars, it doesn’t produce an unsightly non-stop beeping noise to indicate that you’re getting close to a speed trap.

This app isn’t just a standalone app, it can connect to your smartphone which will download updates and sync up with other nearby devices to help you find all the police radars, not just the ones that it’s built to detect. This will give you a far broader range of what can be detected including police red light cameras, speed traps, where live police are and even more. 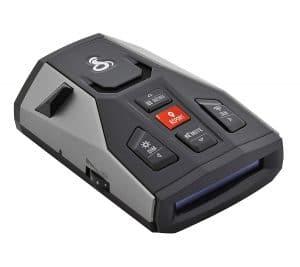 This radar detects the most types of other radars that we’ve seen so far, including laser radars, VG-2 signals and other types of law enforcement signals.

Q: Does this model offer 360-degrees of protection?
A: No, it doesn’t but it offers a very wide range of frontal coverage which is the most important part. Cobra decided not to add 360-degrees of protection on this model because it wanted to focus 100% of the energy on the frontal cone area where most of the traffic stops matter and it does a great job of catching those.

Q: Do I need to buy an additional mount for this?
A: No, you don’t. Some people aren’t a fan of the suction cups that come with the mount but not many people have reported problems with it, in any kind of weather condition. It’s easy to attach and you also get a charger with your purchase, so you don’t have to worry about buying one of those.

The Cobra 0180003-1 IRAD Radar is a high-powered and top-notch quality radar that we can recommend to the fullest extent. While it doesn’t have full coverage of every view around you, it covers where it matters most the best. We also can highly recommend that you check out some of the other Cobra products (like the Rad 450 we reviewed) as well because they provide some of the best anti-radar equipment around (see them here). This model is a little on the pricey side for what it offers but it’s definitely well worth the purchase and it’s highly reviewed.