Best Cobra Radar Detectors - NO MORE Speeding Fines in 2020
RRD is reader-supported. When you purchase through links on our site, we may earn a commission. Read more.

Everyone deserves to drive with confidence without the worries of getting a speeding ticket.  There are times when you unintentionally go a little above the speed limit. And before you know it, you see the dreaded red and blue lights from your rearview mirror and you’re getting pulled over.

If you know this all too well, it’s time to step up and get yourself a new Cobra radar detector.

What does a Cobra radar detector do?

A radar detector works to detect  a signal if there’s a police radar gun or speed trap near you. Law enforcement officers use radar guns or speed guns to detect if any vehicle on the road is going above the speed limit.

With one installed in your vehicle, you’ll have time to slow down. In short, radar detectors equals no speeding tickets!

Let’s move on to discussing the best Cobra radar detectors to help you pick the best one in this review. 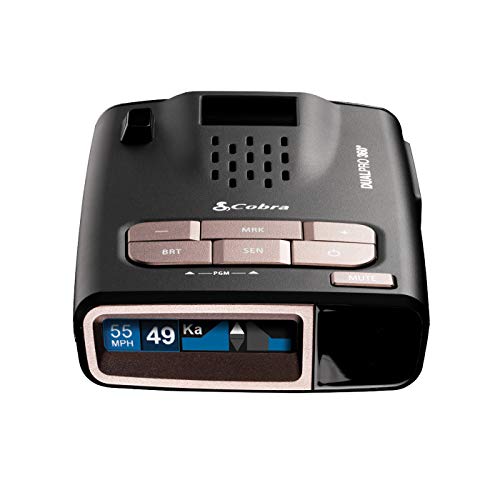 If you want a radar detector with a solid performance, complete features, and full radar and laser coverage, then the DualPro 360 is the best choice. This top Cobra radar laser detector is one that sits right up there with the famous product name Escort Max 360c.

The dual antennas are the highlight of the Cobra DualPro 360 radar detector. They are key to delivering the marketed 360-degree protection from both laser and radar.

In the front, back, and sides, you’re protected from multiple band identification types including K, Ka, and X bands plus advanced laser threats. It has an OLED display as well.

In addition, the high speed digital signal processing or DSP in this product helps with this by dramatically speeding upsweeps. As for the mount, it comes with the usual windshield mount.

With sensors, the Cobra DualPro 360 radar laser detector also intelligently filters out annoying false alarms that don’t come from radar guns. It offers in-vehicle technology or an IVT filter to automatically filter out repeated false alerts, like those we get from blind spot monitors from other vehicles.

This quality Cobra Electronics product does work with the GPS network to give you information you need. On the bright OLED display, your detector will display your current speed and the current speed limit on the road you’re driving on.

You’re alerted as well of any red-light cameras, speed traps, and speed cameras, as the DualPro 360 also comes preloaded with locations of these law enforcement gadgets. The GPS enables an AutoLearn feature as well, which was previously available only to Escort radar detectors.

You can also access the iRadar app with this radar detector. The iRadar helps give warnings on speed cameras or red light cameras. You can even pair this laser radar detector with a dashcam using the same power source and mount.

Overall, the Cobra DualPro 360 is a powerful unit among the Cobra radar detectors. The only downside is the money it costs, but you get what you pay for. 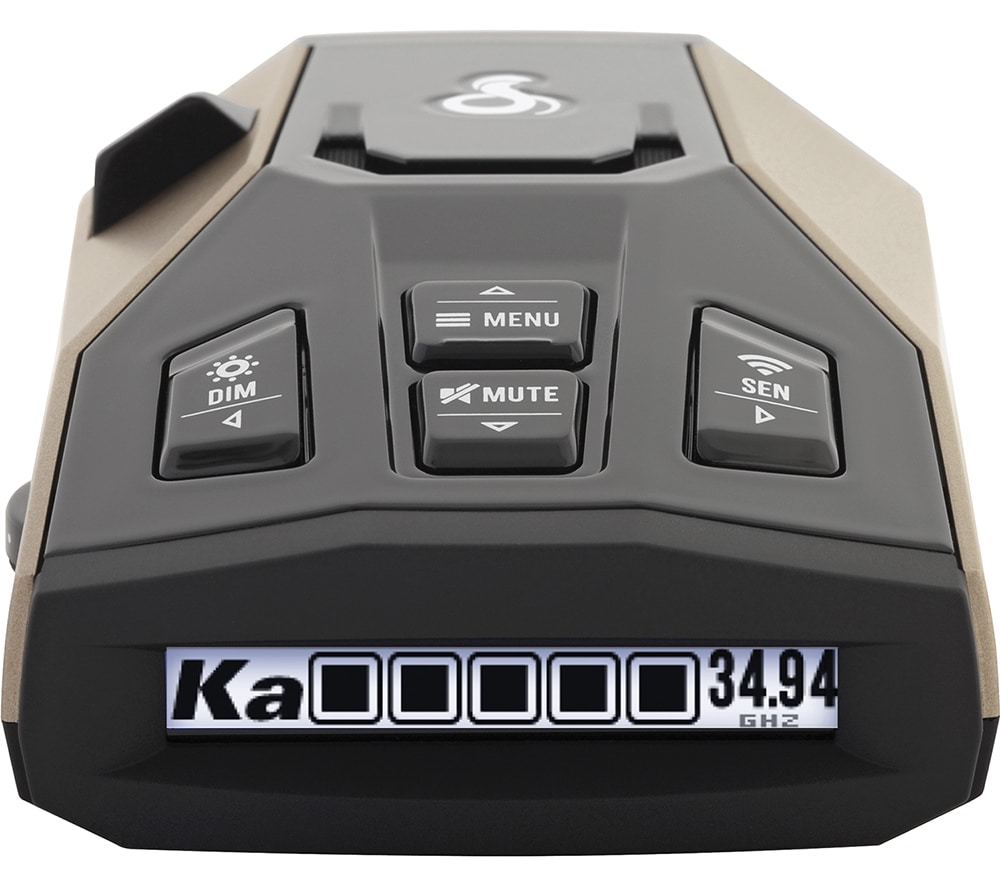 Next in our reviews is the Rad 450. The Cobra Rad 450 meets our eyes with a sleek black and beige design — perfect if you want a change from the usual black type. But under this compact, premium-feeling chassis is a radar detector that deserves its spot as one of the highest-rated.

Packed with a long list of amazing features, let’s review what makes the Cobra Rad 450 justify its position in our best Cobra radar detector list, and why you should mount this device in your car.

The Cobra Rad 450 tracks K, Ka, and X bands, and six different lasers. It comes with advanced LaserEye that promises 360-degree protection, shielding you from police radar and laser on all sides.

The OLED display on the device is bright and easily readable. You can place the device on your windshield. But what makes the Cobra Rad 450 shine is its advanced anti-falsing circuitry. This Cobra radar detector is a superstar at eliminating false alarms and signals.

Instead of requiring you to look at the screen when you hear a radar warning or detection, you may set up automated voice alerts that tell you what you need to know about radar activity, therefore keeping your focus on the road. Voice alerts are super helpful for any driver.

The Cobra Rad 450 is a great rig to avoid speed tickets. Although it lacks long range compared to other Cobra radar detectors, know that it does work excellently for eliminating irrelevant alerts. It’s also easy to use, great for beginners. Overall, the price gives you great value for your money. 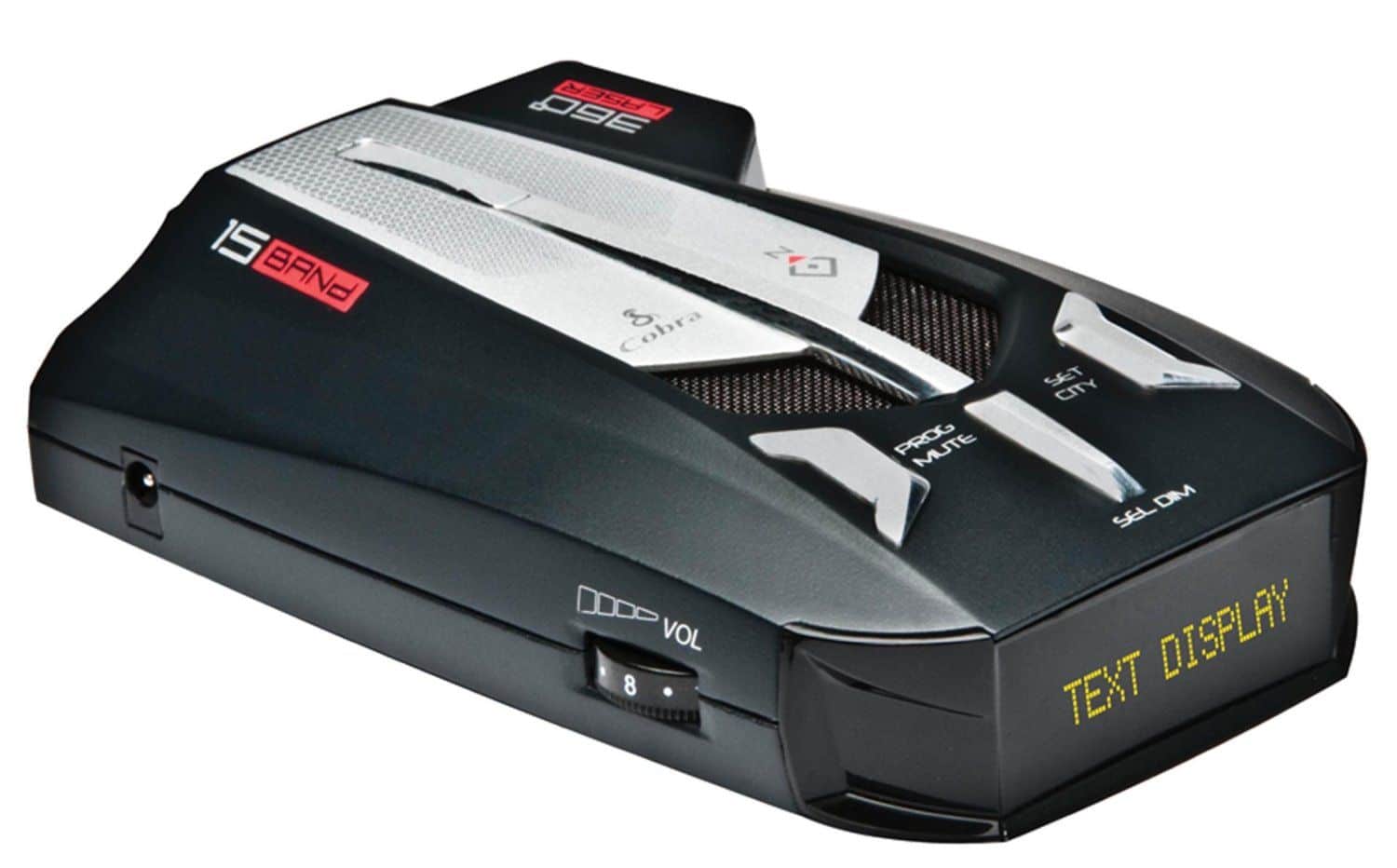 Another product we will review is the XRS9370. It also provides great radar detection as well as affordability.

Close to most of the Cobra radar detectors listed in this review and buying guide, the XRS9370 also has 360-degree protection — a level higher than most radar detection devices in the entry-level range.

Bringing you fast and effective sweeps, the Cobra XRS9370 is capable of shielding you from 6 lasers and 5 bands, including X, K, Ka, Ku bands, and the instant-on POP radar.

You’ll also get awesome long range with the Cobra XRS9370 as this product is equipped with Xtreme Range Superheterodyne Technology. And of course, you want something long range from products like this.

Response time is quick as well, thanks to the super-fast circuitry that provides speedy notifications when radar and laser signals are detected within range. In addition, the display even has a signal strength meter that gives you an estimate of how near or far the speed gun is.

It also comes with a power cord and the windshield bracket.

You may also make use of the city mode and highway mode in this Cobra laser radar detector. This ultimately filter false alerts, but without a GPS, the Cobra XRS9370 is not close to other models that have an advanced filtering system to give even fewer false alarms.

To help keep your focus on the road, Cobra Electronics also has audio alerts in the Cobra XRS9370. It’s not a voice alert though. But it’s pretty close since you can still use them to know what’s going on even when you don’t see the unit because this rig comes with 16 unique alerts.

So, you’re sure to give your full focus on the road.

Need some quiet on the road? Make use of the helpful AutoMute and IntelliMute functions to help you. AutoMute is for gradually decreasing the volume of tonal warnings, while IntelliMute automatically mutes the Cobra XRS9370 when you’re at lower speeds.

Overall, the Cobra XRS9370 deserves its spot as one of the best Cobra radar detectors. The performance doesn’t cost much money like others on this list.

Dual antennas on the DualPro 360 radar detector assure the claimed 360-degree shield for the best long range radar detection capabilities. You get access to features such as speed limit display, AutoLearn, and warnings on the location of speed traps, red light cameras, and speed cameras.

Additionally, the Bluetooth compatibility on the Cobra DualPro 360 allows access to the iRadar app and its features. The iRadar offers real-time, crowdsourced information on road issues so you’ll never be caught off guard.

Overall, the Cobra DualPro 360 detector delivers a grand performance and provides everything you need. It’s one of the best Cobra radar detectors for all kinds of users.

How to Choose a Radar Detector

Cobra Electronics produces some of the finest radar detectors in the market, but it sure is helpful to read a review and check the information before making a purchase. Aside from the price range, here are some things to consider before you buy a new Cobra product:

Before, radar detectors can only read radar. But law enforcement gadgets today also make use of the power of laser. Fortunately,  manufacturers are able to keep up.

Pick a Cobra radar laser detector with two sensors instead of one, because having only one sensor will only detect laser beams coming from the front. With two, you get full 360-degree shields because laser pulses can be detected by the laser radar detector from behind or off the sides.

While radar detectors are mostly legal, knowing if the police are checking you out is useful information. Some radar detectors give a warning and then shut down when an RDD detects you, while an advanced type may even be completely invisible to RDDs.

The Cobra devices listed in the review above are mostly undetectable to VG-2 and Spectre-I RDDs.

While the lack of this function is not necessarily a big loss, having one can provide information that many drivers find useful. It allows your radar detector to display your speed and the current speed limit wherever you’re driving.

It can also give you information of the location of speed traps and cameras on the road, with apps such as iRadar. If you want automatic lockouts of false alarms, then this feature is key.

There may be a ton of radar detectors out there, but you don’t have to search far and wide for good radar detection. It may be easy, and you’ll never go wrong with a reputable brand like Cobra.

Whether you prefer a no-frills product or something with all the bells and whistles, you can certainly buy a new one in the array of Cobra radar detectors in this review.