Are Radar Detectors Legal In California?

When you’re rolling down the highway, it can be tempting to push the limits. But a speed trap could be lurking right around the corner, and you don’t want to get caught speeding! That’s where a radar detector comes in. But are radar detectors legal in California?

Are radar detectors legal in CA?

There are some differences between California state law and Federal law that can work in your favor. Under Federal law, a vehicle could be described as commercial if it can seat up to 16 people. This definition is levied even if your passengers aren’t paying for you to drive them.

But if you are driving a large group of people in California and they aren’t paying you for a service, your vehicle isn’t classed as commercial. This exception includes motorhomes and RVs.

Whether a vehicle is commercial or not can also sometimes be calculated according to weight. Federal regulations dictate that any vehicle used for commercial reasons that weigh more than 10,000 pounds is not allowed to use a radar detector. 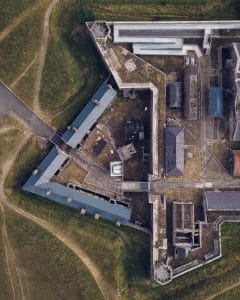 One important distinction to make here relates to driving through military bases. If by some chance you enter a military area and are using a radar detector, this is illegal.

Radar detectors are illegal in California on military bases because their signals can mess up radar systems used in aircraft and other military equipment. However, because the vast majority of military areas will have checkpoints or clear signs indicating where you are, it’s unlikely to get caught out by this law.

At these checkpoints, the staff will request that you deactivate or put away your radar detector to be allowed entry to the base. If you refuse, you will be asked to leave.

Where to Mount Your Radar Detector

In California, radar detectors can be used legally in private vehicles. However, there are still regulations defining where exactly such devices can be placed. 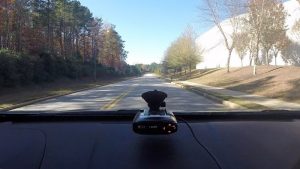 For obvious safety reasons, California radar detector law states that your device shouldn’t be fixed anywhere that would disrupt your field of vision while driving. This includes any part of the windshield. Here is a post I wrote on the best place to mount your detector.

California radar detector law also lists the side windows and rear window as areas where attaching objects like radar detectors is prohibited.

With that in mind, your best bet is to fix your radar detector to the dash of your car or to attach it to the rear view mirror. Neither of these places will impede your view of the road and will allow you to legally use your radar detector in California.

Why Is It Illegal To Mount OnThe Windscreen in California?

Some devices benefit from exceptions to these state regulations. One of these is GPS navigation systems. So if devices like GPS can be mounted on windscreens, why are radar detectors illegal in California when mounted in the same way?

It’s due to the way radar detectors are used. Because radar detectors basically tip you off to a police speed trap so that you don’t get caught, officers tend to take a dim view of their use.

So if your radar detector is mounted somewhere on your windshield, officers have a clear reason to pull you over and hand you a ticket.

Can a cop tell if you have a radar detector?

Some radar detectors may have features that allow them to hide their activity, but this is relatively uncommon. See our post on the best radar detectors on the market. Some of which have stealth mode.

If you have mounted your radar detector on your windshield, a cop is virtually guaranteed to notice it. You’ll be liable to get a fine if caught because of this. 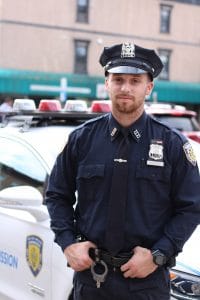 Even if you place your radar detector on your dashboard or your sun mirror, an officer may still be able to notice the device if they pass close enough to your vehicle.

However, if you are using a remote radar detector that is integrated into your car, it is usually invisible to police observation.

Can you get pulled over for having a radar detector?

In California, radar detector possession is not technically something that will cause you to be pulled over, provided you have mounted it in a legal place that complies with state regulations.

However, if you have fixed the radar detector to an illegal spot, such as the windscreen or side windows, then you can certainly be pulled over and fined for having one. This is because the radar detector is deemed to be obstructing your sight of the road, which is a safety hazard.

Whether you get pulled over and fined is also a bit of a gray area because some officers will take a harder stance against radar detectors than others. Ultimately, cops have their own jurisdiction to decide whether to issue a ticket or not. 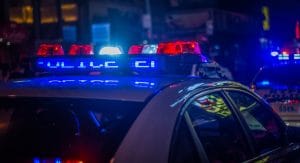 If you are using a radar detector in California, even if you have it mounted legally, some officers may be more likely to find some kind of reason to give you a fine.

What about radar jammers?

While radar detectors can be legally owned and used privately in California, radar jammers are completely prohibited. This stance is echoed by several other states and also by federal law.

Radar jammers are also illegal on all federal highways and roads, and if caught using one you can face up to five years in prison.

Radar jammers can severely interfere with not only police radar systems, but also those used in aircraft as well. This is one of the main reasons why radar jammer use is considered illegal under California radar detector law.

It’s incredibly easy for police officers to notice if you are using a radar jammer. This is because the interference that radar jammers cause to radar guns is pretty noticeable. A cop will know if a radar jammer is being used even if they can’t actually track your exact speed.

Are LASER jammers legal in California?

At the moment, laser jammers are not considered to be illegal under federal law because they don’t cause as much interference as radar jammers do. See this post on the best laser jammers to use.

This is because laser jammers only target the laser beams used in police speed guns and LIDAR equipment, rather than interfering with potentially important radar signals like a radar jammer would.

However, in California, state law prohibits the use of “any device that is [1] … capable of jamming, scrambling, neutralizing, disabling, or otherwise interfering with radar, laser, or any other electronic device used by a law enforcement agency to measure the speed of moving objects.”

This means that using laser jammers is considered to be illegal in California. These devices can’t even be transported around California without possession of a federal license. It is also illegal to buy, sell, or advertise laser jamming devices in California.

What about laser detectors?

While laser jammers are defined as illegal in California, laser detectors can still be legally used.

However, you can only use a laser detector if it doesn’t actually interfere directly with police measuring equipment such as LIDAR speed guns.

The distinction between laser jammers and laser detectors is very similar to the difference between radar detectors and radar jammers.

Laser detectors simply tell you when you are approaching a police speed trap that is using a form of laser technology to measure your speed. You can then slow down accordingly until you have passed the area.

However, devices such as radar and laser jammers are illegal in California. If you are caught using or owning one of these devices, you can be punished by law enforcement.