One of the lesser common known models is the Whistler XTR-438. We had to ask ourselves when we first found this model a few questions. One, why is this model so cheap when it offers so much functionality? Two, how does this model offer 360-degree protection for the price it’s being sold at and more importantly, is the protection that it’s offering accurate because we’ve seen some cheap models before by other companies that gave way too many false positives to be accurate or worth the purchase.

So, we’re going to give into the details of this exact model and find out if it’s worth the purchase for you. 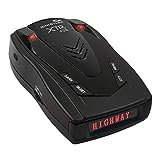 The design of this product is really nothing special. Honestly, it looks like something you could pick out of a toy store for a kid but it does so much more than a typical toy. One problem we have with some of the XTR models (XTR-140, XTR-130, XTR-145) is that they all look like toys.

More importantly than that, we’re not happy with how they like to place some of their buttons and how they’re so close together. Also, they’re on opposite sides of each other with the text upside down no matter which view you’re looking at, so it’s a bit confusing.

This is one of Whistler’s most inexpensive radar detectors (like XTR-135) and we’re really glad they’ve included a product for people who don’t have an arm and a leg to spend. Also, we haven’t found a lot of flaws at this super surprising price, even though some of the reviewers are being a little bit picky.

Sure, you can’t expect this product to be perfect at this price but it’s super inexpensive, budget-friendly and operates phenomenally based on what it sells for.

In addition to being super cheap for what it offers, this thing offers 360-degree coverage which is impressive. You won’t have to worry about any dead zones what so ever, because you’ll have coverage from the front, from the back, the sides and anywhere else that you’re traveling.

You can detect anything coming from a mile away, including all different kinds of radars. This is super impressive when you take the price into account for this thing.

It also surprised us as to how much this detected, especially with the price. We weren’t expecting a lot when it came to the overall detection range and how far the signal stretched out with this one but it stretches out quite some ways. It can detect things not only in front of you but in every single direction and up to a mile away which was impressive to us. 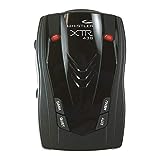 One of the most important things about Whistler XTR-438 is how many options it had for what it was sold for. When you find a product this cheap, you typically don’t expect much out of it but this thing has a ton of options.

You can configure this detector to display so much information, that you’ll want to read through the handbook to see all of the different options available.

Q: What’s the range of this model?
A: We’ve heard some different answers regarding exactly how far the XTR-438 reaches but the most consistent answer we’ve gotten is that this model can easily go at least half a mile which is good.

Half a mile is more than enough to react to a certain alert and we don’t know of any police scanners or traffic cameras (yet) that can reach you up to half a mile, so if you’re on a flat stretch of highway, you can rest assured you’ll have plenty of time to react.

Q: Do I have to update this?
A: No, you don’t. Also, we’re not sure if this thing even provides you with updates via smartphones like some of the other radar detectors do. That’s not clear and even if it does, it’s one of the cheaper models so we really wouldn’t be surprised if it didn’t.

You do kind of get what you pay for and if you’re looking for a cheap model radar detector that does the job it’s supposed to, this is probably one of your safest and best bets.

So what’s the big deal with the XTR-438 and is it worth the purchase? It’s honestly hard to say something so cheap isn’t worth the purchase because this model isn’t expensive and we’re not sure what kind of budget you’re on if you’re doubting this.

It’s powerful, does the job it’s supposed to but it’s not going to be the best radar detector on the market because it’s not one of the more expensive ones with the most features. We do fully recommend this budget detector though.