Also, it’s a pretty powerful detector according to some people who have bought this thing so it’s time to review this detector and see if it’s actually worth the hype or if this is another marketing gimmick. It seems like it comes with a lot of cool and great features, so what’s the verdict?

The design is very small, like another model from the brand, the CR75 (RRD review: https://www.ratedradardetector.org/whistler-radar-detectors/cr75-review/). With that being said, it was almost certain that a lot of the buttons and functions would be very close together. We kind of expected that to happen. However, what we didn’t expect is that some buttons would be so far apart, so we’re not sure exactly why they did that or what purpose that serves. I mean, it’s small enough that it shouldn’t matter but having the buttons that far apart is still kind of inconvenient for when you’re on the road or moving, there can be a lot of misclicks or mishits.

We love that this detector is small. So many detectors today come in an obnoxious size and we’re not sure why. We don’t know why so many detectors today come in such an obnoxious size because it doesn’t improve their functionality, it doesn’t improve how many detections they can track or how they function, so what gives? What exactly drives these companies to make such large detectors? This one is small enough to fit wherever you want it and it still provides enough power to do whatever you want.

Like some other Whistler products and why we love them so much, this detector provides 360-degree coverage and gives you full area protection around where ever it is that you’re driving. Even if you’re driving in some dead small town that you don’t think any police are around, we guarantee you this will pick up those scanners that are hard to detect. No matter how far they are away (there is a limit), you will have plenty of time to react, regardless of what direction they are.

We hate that some radar detectors don’t allow you to either control the volume or silence the annoying sounds that come with them. This detector, which is like its brother the XTR-335, however, allows you to completely control the volume and allows you to mute the sound if you need to. You don’t have to worry about answering the phone and having this detector go off in the background if that’s the main concern of yours. 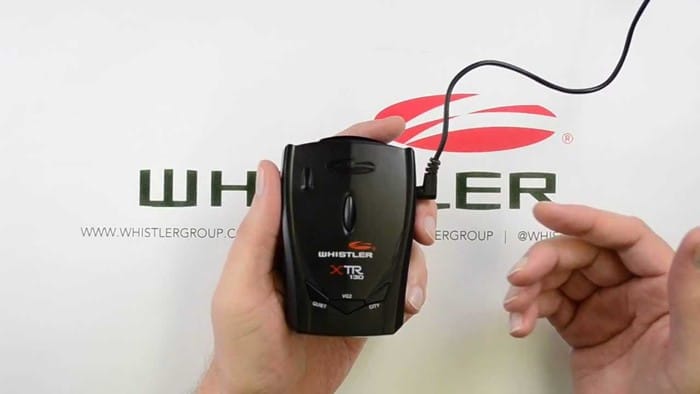 Q: How big is this model?
A: This detector comes in at a pretty small size. It’s one of the smallest models yet that we’ve seen and it’s quite impressive that they were able to conjure up a display screen that could display all the information on a model this small.

The overall dimension of this item is only 3.5 inches by 7.75 inches approximately. Some people have reported that these can vary a little bit but this is one of the cheaper models and it’s a smaller one as well.

Q: How large is the coverage?
A: Depending on who you ask, the coverage area will vary from person to person. However, with 360-degrees and at least half a mile of coverage, like the XTR-145, you don’t have to worry about any speed traps sneaking up on you.

You will easily be able to see them coming from a mile away and you’ll never have to worry about the POP mode signals either because you’ll see them coming as well. We believe that it’s at least half a mile but some people have reported that this thing has worked for up to a mile away but we’re not sure exactly.

This is one of the most inexpensive models out there and Whistler seems to be pretty good that. Whistler seems to be adept at providing detectors that aren’t exactly expensive but still provide some good functionality. The Whistler XTR-135 is a good model and we recommend that you try it out because we haven’t seen any complaints and it’s a pretty solid model for the price it’s being sold for.