The Whistler XTR-543 is a battery-operated laser radar detector with fairly positive ratings from its long-time users as well as Whistler-lovers. Once you have the Whistler XTR-543 set-up and running, you won’t be facing any on your road trips. You will be notified promptly miles before. Also, the equipment makes sure you see those alerts if you don’t hear them, with the aid of notification lights that fire up with an alert, stealing your attention. This might be dangerous in certain conditions when you need to focus on the road, so be careful and don’t react too quickly to the visual notification while driving in a tight spot or near a turn. Your life is more precious than avoiding a speeding ticket (Read: Speeding Facts from the National Highway Traffic Safety Administration). 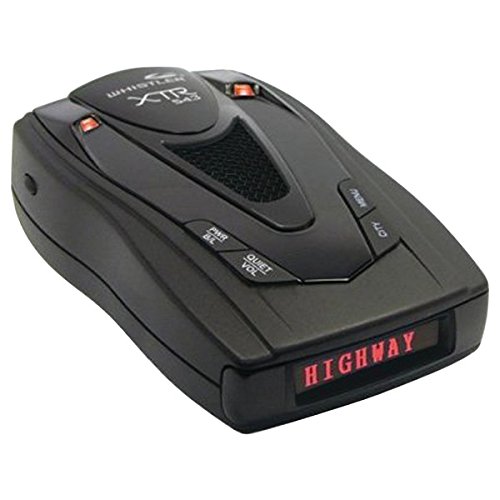 It allows you to be alerted for many frequencies and technologies including POP mode radar. This is a package full of features including voice alerts, a great display, periscope, modes for city and highways, and so on. This is a product we recommend to all those who want a reliable, long-term usage radar detector at an affordable price. In other words, if you want good performance and efficiency and don’t want to shell out a lot of money for fancy techs and glittering features, this is the product to choose.

The build quality is nothing short of premium. Whistler XTR-543 uses high-quality material for its great-looking case. The two LEDs are placed ergonomically. The distinction between a cheap radar detector and a high-quality one might not be the overall design, but the sleek design that the XTR-543 comes with is a valid indicator of the brand’s commitment to high-quality production design.

The buttons are placed very suitably and when your palm reaches the device, you will feel it has a good grip. It fits in your palm effortlessly, and it feels smooth when you press a button on it. The speaker is in the very middle, so you don’t get distracted by it, and the LED lights are at the very top – making them hard to accidentally touch.

One thing that seems a bit off about the display is that it’s a blue OLED without the option to choose your favorite color as the background, as in many other Whistler models of the same range (See: https://www.ratedradardetector.org/whistler-radar-detectors/whistler-cr90-laser-radar-detector/). The reason is perhaps that backlit LCDs are better for that functionality. Still, one would expect Whistler to not be limited by display panel technologies when it comes to serving its customers.

The alerts aren’t just bleeps and different tones. With the Whistler XTR-543, you get voice alerts so that there’s no distraction, all the while you’re understanding what’s going on completely. Voice notifications have been a pioneering technology in consumers’ fight against the speed guns and the XTR-543 follows suit. And with voice alerts, you can also be sure that in case you don’t understand a particular tune, you always know what it means because of the voice.

Like many other Whistler models, the XTR-543 also comes with 360-degrees coverage. What this means is that your detector will detect radar emitters from all directions: the front, the rear, and the sides as well.

The XTR-543 comes with a total of four modes: three city modes and a highway mode. These help you reduce false alerts by optimizing the signal capture. Nevertheless, there are many times when the highway mode still captures a ton of false alerts, so it’s quite questionable how reliable these modes are. 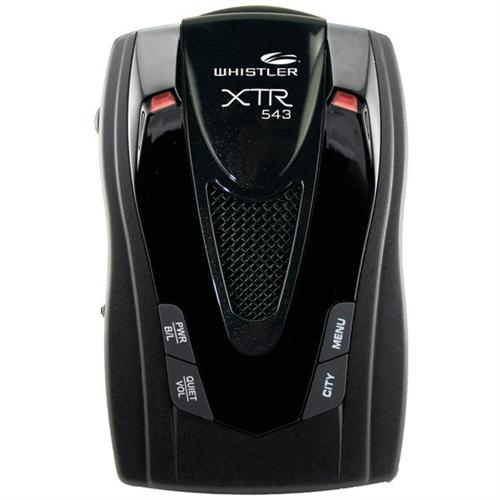 Just above the case, there are a couple of blue LEDs that sit there to visually notify you by blinking when you receive an error. It’s not rare that you disregard alert audio when there’s a lot of noise in the vehicle. A visual cue will help you pay attention to the alert nevertheless, making the Whistler XTR-543 a powerful tool for radar detection.

Q: The XTR-543 doesn’t pick up cops using speed guns that are less than a mile away, why?

Q: Why does the unit shut down automatically?

A: The XTR-543 comes with an automatic shut down system. You have most probably turned that on, this happens when you press and hold the City button for a few moments and a lot of people do it accidentally. You will find that there’s usually an audible warning before it shuts down, this is when the timer reaches zero (the possible configurations are Off, 1, 2, and 3 hours). You can press any button during this warning to extend the timer too. 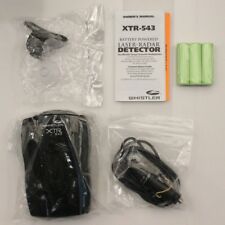 With some conventional, rich features such as a decent range, voice alerts, and OLED display, the Whistler XTR-543 additionally comes with more add-ons to make your drive safer. For example, it comes with a built-in charger and the Stay Alert technology from Whistler that tests your alertness on long drives. Further, you can choose different tones for different bands and it also comes with a couple of filters.

The buttons are soft-touch and easy to press once your finger is on them, making it a seamless experience. As the night inches closer, you can turn the display further dimmer. A lot of drivers don’t appreciate the dimming of the LED screens and make do with the default brightness levels. Our advice: test out turning your screen dimmer or darker in the night to reduce the strain on your eyes. But if you’re feeling sleepy, of course, don’t do this. The Whistler XTR-543 comes with a total of four levels of dimness.

With the pressing of one button, you can save your settings so that the device remembers them. It’s a good addition. With a high gain lens and an automatic vehicle battery saver feature, it’s truly an amazing radar detector that will impress you with its efficiency and functionality. (See other Whistler units from the XTR series here: XTR-195 review and XTR-540 review.)