Quality is important when searching for a police radio scanner. With a reliable radio scanner, you’ll be able to view police channels without having to waste time with manual programming. That’s where the Uniden SD100 comes in.

In this review, we’ll help you know more about the Uniden SDS100. With the consumer opinion, you’ll get a clear perspective on how the device operates. Or if you’re looking for its brother, the Uniden SDS200, proceed here: https://ratedradardetector.org/police-scanner/uniden-sds200-review/.

With that being said, let’s start the review!

The Uniden SDS100 is a digital handheld scanner equipped with an LCD display. It feels short but has a thick handgrip that’s molded to the device. It’s rubber trim around the bottom areas, and the handgrip feels slicker than previous models, giving it more durability.

First, the Uniden SDS100 has a backlit keypad. It has three softkey buttons placed on the front of the unit. The functions can change depending on your police scanner’s status. The SDS100 comes with a squelch/volume/select multi-control knob placed on top of the unit and its menu controls. Simply put, this device has a user-friendly design, unlike some complicated models such as the TRX-1, which we also reviewed: https://ratedradardetector.org/police-scanner/whistler-trx-1-review/.

The scanner has two connectors located on its right side. One is a Micro USB connector, and the other is used for USB PC connections and battery charging. So, you can plug your scanner into your computer and save your recorded files onto your desktop.

Uniden uses its trademarked Sentinel software to help with its connectivity. This device is compatible with Windows 2000, X, Vista, And Windows 7-10 operating systems. It sends programming updates through the Mini USB connector and a Micro SD card.

The software’s newest version can support up to three scanners. You can program information/frequencies on the scanner’s keyboard. Thus, making it a great tool for advanced users who want to have complete control over their scanner.

The SDS100 comes with a True FQ Receiver. It’s designed to improve the device’s digital performance even in the toughest RF environments. It uses an I/Q receiver that capture’s the waveform signal in 3 dimensions. This creates better signal recovery and improved error correction.

This makes the SDS100 the first police scanner to use SDR (software-defined radio) technology. Uniden’s digital performance is better than competing devices in both weak-signal and simulcast environments.

The RF Capture Technology feature allows you to set the scanner so it can provide information on local radio transmissions. It can do Do Not Disturb checks for channels that are between the channel reception so that the active channels aren’t interrupted. This helps you tune into the channels you’re interested in without wasting space.

We like how the Uniden SDS100’s easy setup. Users can program each of their favorite lists using a Startup Key (0-9). This helps because once you start up your police scanner and select the key number, the Favorites Lists that are assigned to the key can be scanned. 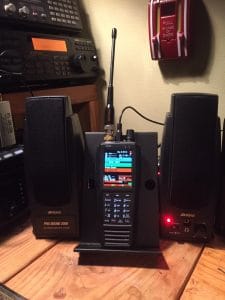 Some users have stated that the SDS100 was too bulky and wished it could be as compact as the BC125AT. While it does have a thick outer covering, it can be difficult to carry it around in your pocket. Even if the radio is attached to your belt, you’ll still find yourself bumping into every doorway you walk through.

The Uniden SDS 100 exerts too much heat while in operation. While it has less operating power and screen resolution than a smartphone, it still delivers heat at a higher temperature. If you’re going to use this radio, make sure to have it in cool temperature areas, so it doesn’t overheat.

The battery charging time has been subpar when in use. For instance, users would only be able to use the radio for 2 hours of use, before needing to be charged. The usage time vs. charged time is rather disappointing for a product of its caliber.

Still, it performs well in use, making it a great radio scanner for tuning into local police conversations. Just make sure that its battery is at least 80% to ensure that it continues to perform while operating.

Overall consumers have had a positive reception about the Uniden SDS100. Here’s what they had to say.

First, the scanner is miles ahead of its previous models. It comes with a customizable screen, making it easier to tune into your favorite channels. And it consists of a Li-Ion battery that can be charged while the scanner is in use.

The close call alerts work really well. When in use, the scanner beeps once it’s on and then starts playing audio from the nearest police station, automatically.

Users who are interested in weather alerts will like the Uniden SDS100. It will alert you once the SAME alert transmits through an NOAA weather channel. This makes it easier to get weather reports and find if there are any natural emergencies within your area.

However, some consumers were concerned about the Uniden SDS100. The battery charge port is weak and can snap the plug off the circuit board. We suggest that you remain careful with this device when it’s charging, to prevent it from short-circuiting.

Despite its minor issue, users like using the Uniden SDS100. It allows you to set priority to your talkgroup IDs, making it easier to organize your police broadcasting stations. Due to its customization options, state of the art technology, and its easy setup, you can utilize this device to hear everything around you!

Overall, the Uniden SDS100 is a great all-rounder police scanner. Not only can it program 10 search ranges, but also quickly search for channels at a displayed frequency. If you’re looking for a high-end radio, this is a great option!