The 6 Best Police Scanner Apps of 2020 - Android & iPhone
RRD is reader-supported. When you purchase through links on our site, we may earn a commission. Read more. 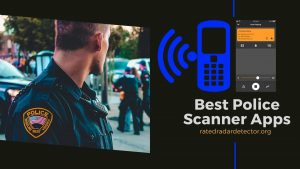 Based on our research and reviews, here are the 6 best police scanner apps for Android:

Police scanner apps will work wonders for your Android phone or iPhone. Not everyone can afford to shell hundreds of dollars for the best police scanners, but you can have apps that can detect signals within seconds. Listening to normal police scanners may be illegal in some places, but luckily it’s not the same case with the apps. Fortunately, this review was made to help you acquire police scanner apps available for your smartphone, both iOS & Android. Save time and read on for our best apps list:

Police Scanner by Logicord is a great police scanner application for android and one of my favorites on this list. You can connect to EMS and police feed. The best thing about this application is that listening from around the world is possible.

The user interface is easy to use, thanks to the app’s design. And it allows you to hear additional feeds in Canada, Australia, Ireland, and Chile. Thus, making it a great support for users that want to be limited to feeds.

As for its organization, you can save your most listened amateur radio stations for easy use, and even browse the principal 100 feeds. One of the better things about the app is that the developers keep up with it, so improvements and updates are always added, which means it’s compatible with most iOs/iPhone devices.

One of the best attributes is the app’s ability to listen to signals online in a slower internet connection. Also, it can find feeds concerning your GPS location. Thus, making it a versatile scanner for those looking for quick feeds.

Broadcastify has a huge collection of channels for users to scan. These channels are sorted based on the user’s county and metro locale. The channels tend to be stable, especially the ones that focus on EMS and fire services, making it among the most decent EMS scanners today.

The application has a nice appearance design-wise. Additionally, it has its website, meaning that you can listen to police scans on your desktop computer. You can download it on your iPad, which might be an ideal option so you can free your smartphone for more tasks.

Users can discover over 6,000 streams with Broadcastify. It provides local feeds from police radios, but also aircraft, public safety, rail, and marine live audio. Thus, making it a versatile device for users wanting the most signal options available for listening.

There are free and pro version options, however, the premium mode has no ads and feed archives. When using Broadcastify, start with the free version and decide if the advanced version is worth paying extra for.

The scanner broadcasts are organized in sections such as the Official Feeds, Latest Feed Additions, and Top 50 Live Audio Feeds. And it has a Browse By Location feature so you can look and listen to the police for scanners in your area. 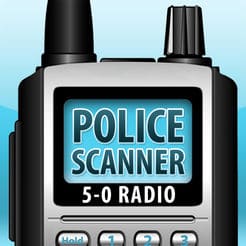 Next up in this is the 5-0 Radio Scanner app. This is loved amongst Android and iOS/iPhone users because of the best services it brings. For instance, you can listen to international radio frequencies, even if you might not understand what’s said in other countries. This is one of the best free scanner apps for the iPhone.

What’s great is that you can hear police channels minimized. Competing applications require you to stay at the forefront to hear signals, but this allows users to do other stuff while listening to news signals. You can edit favorites and look at the topmost 100 radio. This is compatible with Android phones and iPhone X, too!

The app is filled with info and offers. It gives you the ability to look up police shortcodes (187= murder, etc) and can contact or communicate with over 5-0 Radio Scanner users. Thus, making it great for those that want to share recordings and communicate on a live network.

The only issue about it is its appearance. It has oversized buttons and while its fonts and coloring are fine, the upgrades and ads on the free version of the app can be off-putting. If functionality is your main concern, this app will suffice. 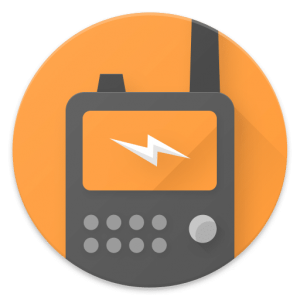 One thing that sets Scanner Radio apart from its competitors and other best scanning applications are that you can create mobile alerts to notify you when people are listening to a nearby feed. This indicates scanner activity and can alert you if police are within your whereabouts.

Speaking of police feeds, they can be browsed by the frequencies nearest you any time. For instance, users can detect frequencies based on location, greatest 50, and the source (i.e. Broadcastify, RailroadRadio, Scan BC).

Scanner Radio also has a multitude of offers, including the ability to receive a notification when users tune in to a particular station, including amateur stations. You will see nearby scanners, making this a versatile app for Android users.

While you can’t listen to every scanner frequency out there, Scanner Radio gives users access to over 6,000 channels. One of the best things is an emergency guide, so you can decide what EMS, fire, police, aviation channels and rescue dispatch are saying. These have a code that’s followed, so this guide or manual will help you determine and understand what they are saying.

Police Scanner X has a custom stream player for better battery savings and faster playback. When searching for signals, it has Top 50 local signals and you can save your favorite ones for later.

For most people, it can be hard to notice the police codes at first. This, unlike other apps, includes the Police radio 10 codes that are used for reference. Thus, making it easier for you to hear the chatter that’s on the police radio.

What police stations are spotted on this app? It allows users to connect to Madison, Newark, and Cleveland police, and more. With this feature, users can stay connected to police broadcasts and networks.

You should consider getting the Police Scanner X if you need quick signals in your home. Android users will like this app because it helps them view signals in under 3 minutes. So use it if you want fast signals from a responsive system.

Beyond the basics, Scanner 911 is well designed. It offers police codes within a given stream and shows the popularity of each radio feed within your county. Users can also customize their skin for more readability or visual appeal. It also comes with Material Design and equalizer.

Our favorite feature is the Scanner 911’s map integration. By using this feature in the settings, once you open up a stream, your iPhone reveals a map that shows the feed’s coverage area. While it might sound inconsequential, but when hearing a buzz on the radio, it’s good to have a reference map to see where the alerts are located.

Consider getting it if you want apps that are readable, intuitive, and will give you access to customized channels. Scanner 911 does a great job of streaming radio while providing friendly user experience. It works pretty well too.

Conclusion – what is the most recommended app?

To conclude, there is a myriad of police scanner apps that are on the market all over the world. So yes, Police scanner apps work and it is legal to listen to a police scanner. Want one for iPhone/iOs? Download Broadcastify – it is the greatest police scanner app for iPhone. For our Android fans, Scanner Radio has you covered. No matter what scanning apps you choose, you’ll find it easier to pick up signals when traveling on the road. This makes scanning easier too, unlike going through all the hassles of programming a radio to serve as a police scanner. Curious about it? Read this: https://ratedradardetector.org/police-scanner/how-to-program-baofeng-UV-5r/.

Q: How do police scanners work?

A: Police scanners work in a way you can use them to listen to different channels including police ones.

Aside from these apps, did you know you can also do radio scanning using your PC? See our article about online police scanners. But for physical police scanner for your vehicle, remember to purchase good antennas so you maximize your scanner!

Do you have any questions about getting new police scanners for your phone?

Ask us in the comments below!