The Escort Passport X70 is a high-quality and high-performing radar detector with a visually appealing indicator and we like that it tells you your miles per hour. It’s probably easier to see than your actual speedometer which is nice and since this thing uses lasers, we were a little concerned at first with how this thing picks up its signal and if it gives off any faulty errors, which is why we decided to try one out for ourselves.

It seems like a relatively solid product and it has an app that you can attach to the radar for increased accuracy, so let’s see what else this has to offer. 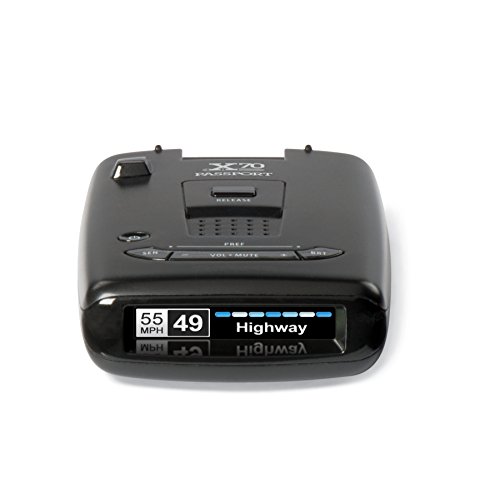 We like how thin the design of the Escort Passport X70 radar detector is. It’s small enough to fit anywhere without being in the way and the screen is large enough to easily read the information that’s being output. The color scheme is pretty plain and they probably could’ve used an easier to read font selection for the buttons, but they’re not too hard to read. Here’s another detector we recommend if you want a cool-looking device on your dashboard: https://www.ratedradardetector.org/escort-radar-detectors/passport-max-limited-edition-burled-wood-review/.

People with vision trouble might have a little trouble reading the buttons but after a while, you’ll know what they do without having to read them anyways. It is similar to its successor, the x80. Find out more about the two in our Escort X80 VS X70 feature.

Every kind of band you can imagine including K-band, X-band and Ka Wideband is detectable and some of the most difficult to detect can be detected with this radar detector. If one of those tricky state troopers is using an instant radar mode, then you’ll have a pop mode to help you detect even those and give you more than a prompt warning to slow down. The 9500ix is another model which has this ability.

This will eliminate other noise and signal sources around you to help you fixate on what’s import and what’s most relevant the actual police and law enforcement signal noises. A lot of things can interfere with other radar detectors and with this detector, it has a sensitive mode to help eliminate most of that.

This model does not have GPS, however. Know if this is a deal-breaker by comparing it to to other GPS-enabled models. We pitted the Escort Passport 9500IX VS X70.

You’ll be able to easily control everything on the radar with the touch of a button. You can easily mute the Escort Passport X70 so you won’t hear any beeps or annoying noises and you’ll also be able to auto-mute the radar if you set it up so that you can reduce the volume of alerts during important conversations.

During lengthy radar detections, we know the volume can be a bit annoying which is why you can auto-mute the thing after a certain amount of time.

The 8500×50 is another model with this auto-mute feature, make sure to check the review here: https://www.ratedradardetector.org/escort-radar-detectors/escort-passport-8500×50-black-review/ 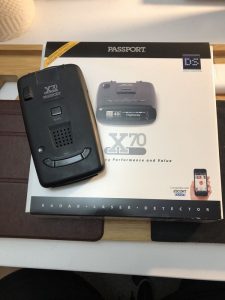 The Escort Passport X70 radar detector has one of the best displays we’ve seen in a long time. It has your miles per hour, a nice bar graph, the expert meter and other display options that you can customize and display at the touch of a button.

If you pair this radar detector up with the app, you can view other relevant information in your area like speed traps and other user reported things to watch out for in your area, which will help greatly reduce the number of tickets you and other people in your area are getting.

Q: Do I need batteries for Escort Passport X70?
A: No, you don’t. It isn’t a product you’re going to install like others, but the Escort Passport X70 has a power cord that’s included and it plugs into a 12-volt power outlet, which most commonly includes the lighter. That’s the easiest way to plug it in and that’s the best power source as it uses the least amount of power, making it easier on your battery.

Q: Does this offer 360-degree detection?
A: Yes, this does. The radar detector works at every single angle like the Max 360 overviewed here. However, the laser detection doesn’t and there’s no way for it to work any other way than a frontal cone. Laser signals are different than other radars and you don’t necessarily need laser detection from the rear or the side, only in the direction that you’re traveling.

Also, be reminded, that you’re going to get what you pay for when it comes to these types of radars, like others from the brand (see here). This radar captures a lot of different signals and has saved a lot of people money on traffic stops, so we can recommend this product 100%.

We hope this Escort Passport X70 review helped you make up your mind on what detector to get!