Radar detectors were created out of necessity—the prevalence of speeding and the tickets that come with it have sparked an idea for inventors to take the particular nuisance out of the road. And oh, how far they’ve come along… from detecting several types of bands to a capacity for crowdsourcing and making them fully integrated into your car, radar detectors have developed to cater to almost every particular need. 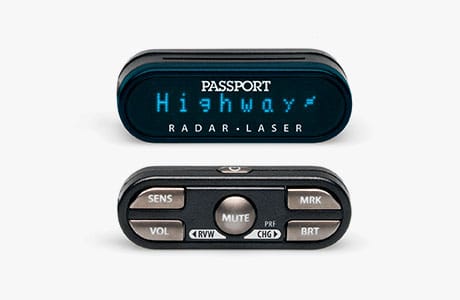 The Escort Passport 9500ci is a product of such evolution, giving drivers an option to custom install it in their vehicles. Thinking of taking the jump? Here are some considerations, besides the fact that the 9500ci is built on the widely acclaimed M3 electronic platform from Escort.

The Escort Passport 9500ci is made for your convenience. The custom-installed detector can be completely controlled with a unit that is only as big as your thumb. It is highly intuitive though, and the backlight is truly convenient. With its size, it is easy to conceal, although misplacing can be a problem.

The radar detector also has none of the problems of an OLED display (like this radar detector does), as the LED is still readable in a brightly sunlit environment. You can even customize it as pleased for a sleeker appearance. All the indicators you need are fitted on it, guaranteeing both safeties from speed traps and safety on the road.

This Escort-exclusive feature evades radar detector detectors (RDD) and keeps your device from transmitting any signals, which renders the Escort Passport 9500ci almost invisible. Even if you are operating it in an area where radar detectors are prohibited, this feature would avoid having you discovered. This feature is not common among older models like the Escort Passport S75.

Most custom-installed and mounted models are no match for the range of the Escort Passport 9500ci. It has consistently rated highly in previous tests and is among the benchmarks of accuracy for its contemporaries.

Part of what made the Escort Passport 9500ci pricey, especially during its initial release, is its built-in nature. Just as it would be kept from view from unwanted onlookers, the Passport 9500ci would also lend some safety and convenience in areas where the technology is not allowed by law.

There’s little fuss in adjusting the Escort Passport 9500ci based on where you’re driving. That’s because it comes with a capacity for speed-variable sensitivity, which adjusts the speed as necessary.

Radar detector users are often irked by false alarms, but the Escort Passport 9500ci promises to dial down on them. Unlike other detectors that were quickly made outdated by blind-spot monitoring systems, the 9500ci can distinguish between police radar and a similar signal emitted by newer cars. The alerts that come out of its external speakers are also clear and can be trusted as legitimate.

You can be warned of incoming red lights as well as speed traps, thanks to Escort’s online database that could be accessed by the Escort Passport 9500ci.

Q: Can I install the Escort Passport 9500ci on my own?

A: Yes, that is an option if you are knowledgeable about the device and how the custom installation should be done. It is still preferable to employ the help of authorized dealers and installers in case you are new to the system. If you are looking for a similar model which you don’t need to install, check 9500ix: https://www.ratedradardetector.org/escort-radar-detectors/escort-passport-9500ix-review/

Almost everything you desire in a radar detector could be found with the Escort Passport 9500ci. It has the best and latest technologies from Escort, a wide and dependable range, a system to minimize false alarms, and a sleek design that makes it almost invisible. What’s more, it is protected against blind-spot monitoring systems. As such, it comes with a premium price that not everyone could afford. If you’re new to custom-installed radar detectors, you would also need the services of a professional installer that may be an added expense.