The R series, Uniden’s top radar detectors, was received with much acclaim when they were released. But just like any other radar detectors, they are not perfect. In time, these detectors are bound to be surpassed by the competition regardless of their topnotch performance and speed camera detection (in both city and highway settings, by the way). So what’s the company got to do? Issue a follow-up on its bestseller radar detectors, that’s what. 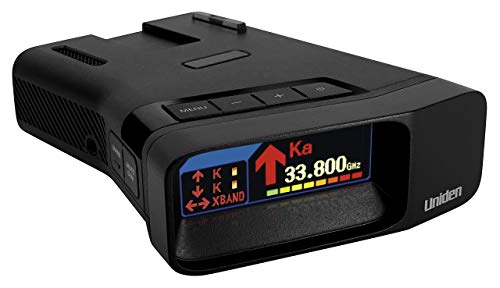 You read that right—the highly popular R1 and even more of a bestseller Uniden R3 have relinquished the throne to a new radar laser detector, the Uniden R7. When the community first learned of the new development, it quickly became posed as the year’s best radar detector, a title that speaks of the community’s confidence in the brand based on its product.

It is also thought to be the company’s answer to its rivals’ top of the line radar detectors, such as the Escort Max 360 and Valentine One detectors. The Uniden R7 has the directional arrows that the Valentine had rights to for so long, and is a feature that the older version was missing, but that’s just one additional feature. There are more advanced features to expect from the radar detectors, some of which we’ve summarized for you in the review below. If you’re interested to see a more detailed comparison with the Uniden R3, check here.

Let’s start this review by discussing the design. The Uniden R7 models are not a teeny-tiny radar detectors by any means. The machine packs up in size, but that is for a good reason instead of being an arbitrary choice. But with the included neoprene carrying case, you’d have no trouble transporting this radar detector.

Its display, which will be tilted towards the driver and will come in full-color OLED, is the largest among radar detectors, even edging out the size of its competitors.

The text on it will also be larger than before, which will help in its readability and use when there are speed traps around. It will have a light sensor and an auto-dimming function that is dependent on the lighting conditions.

The sleek machine has plenty of buttons located on its exterior to help you use and configure the device as pleased. There are the basics such as a menu button, separate buttons for increasing and decreasing volume, and power button, all located on top.

The side, meanwhile, is home to the mute and mark buttons. The functions differ based on the type of press. For the latter, a single tap means to mute the alert, a double press remembers a false alert, and a long press adjusts the detector’s brightness.

For the mark button, a short press marks a location, another short press while in the vicinity of the marked area deletes it, and a long press will free your detector of all stored GPS marks. This could take a while to remember although this is nothing unusual when you use detectors.

Part of the justification for the size of the radar laser detector is also the directional arrows we have mentioned earlier, to be located on a corner of the display and indicated as right, left, up and down arrows. The display can show alerts simultaneously (they will be maxed out at four) while also indicating the signal strength from each direction.

Depending on the strength, the arrows on display will change from green for weak, yellow for medium, to red for strong. The initial firmware update will give the Uniden R7 the capacity to show strength by the band, so take the time to have that radar laser detector update as soon as you can, and as often as you can.

There are more than a few departures to count from the appearance of the previous radar model, such as the rear antenna, for instance, which will be located on the right side of the display. The power cable port is now transferred to the detector’s right side, making it more like its competitors in this aspect. The existing suction cup does an adequate job, but you might want to look for another one to use, preferably a smaller suction cup, to hold the Uniden R7 radar detector firmly in place. Lastly, it now has a Micro USB instead of the Mini USB, and the package should come with a USB cable specifically for its use.

While the rate is not what we have initially seen, the device with its beta firmware has edged out the rest of the competition such as the Escort Max 360 C and the Valentine One, and even its fellow Uniden radar detector on the most common frequencies detected by these machines in a few tests.

Only the custom-installed Escort Max Ci 360 exceeded it more than once, but with the price difference, you can count on getting the best. Even rear performance is top notch and easily surpasses other top of the line radar detectors in alerts. Perhaps as a means to balance things out, the Uniden R7 radar detector is wanting as a laser detector though.

If you are looking for more info about the R3: https://ratedradardetector.org/uniden/r3-review/

Like many other radar detectors, one of the features you can use is the distinct setup for driving in the city and on the highway. While the latter maxes out the sensitivity of the radar detector, city mode will see a 10% drop when it comes to the K band to keep false alerts at bay. As you know, alerts that don’t come from speed guns are one of the things many radar detectors fail to filter.

You can use an advanced setting that will have you manually adjust just how sensitive the machine should be in case highway and city modes do not suffice.

It will be undetected by most RDDs in any direction, making it ideal for use in areas where the technology is against the law and at par with its competitors.

Taking cues from the features of the competition, the device will be able to sweep lower ends of the K band. It will go even lower than what the R1 and the R3 are currently capable of doing.

The Uniden R7 will retain the best filtering system we’ve seen previously on the R1 and the R3. It is likely to see an increased number alert and false alerts though if not configured further, given its improved sensitivity, at red light and traffic.

The previous model from the R series will reportedly not be having this feature any time soon, but the new flagship will have it right after its first firmware update. It will be similar to Escort detectors’ AutoLearn technology in which the detector automatically knows whether an alert should be ignored, ensuring a quiet ride that’s free from false alerts.

With the use of this feature, you can save up to a total of 2,000 lockouts, both automatic and manual. The machine should also be equipped with a manual mute button for you to use while we’re waiting for updates.

Q: When is the R7 scheduled to be launched and how much will it cost?

A: It is already available for purchase and shipping now! The R7 was released by Mid-April as initially anticipated. It is more expensive than its older siblings as it retails for $599.

Q: Will there be a non-GPS version of the Uniden R7 radar detector?

A: Uniden has not expressed an interest in releasing a non-GPS version of the R7 although that may change in the future.

Since its launch some days ago, the Uniden R7 extreme has already proven that it possesses increased performance and sensitivity than the radar detectors in the competition. It also doesn’t suffer from lesser performance on its rear sensor. Bluetooth is a minor absence, but we have yet to see if the brand will remedy that.

Basing on the initial run tests, we can say that the hype built around it is justified. As for the price, we’d say its price is reasonable as well. With firmware updates to follow, we will see if it even becomes more of a force to be reckoned with and if it indeed is a strong contender for being this year’s best radar detector.