The Beltronics RX65 Red Professional Series radar detector reviewed here has a unique design that can provide you with an effective way to avoid getting expensive speeding tickets. It has several settings and options that you can customize to your liking. The 280-nits LED screen on this device is particularly impressive, allowing you to track numerous threats at once. If you are looking for a solid radar detector, we highly recommend that you learn all about what this one has to offer. 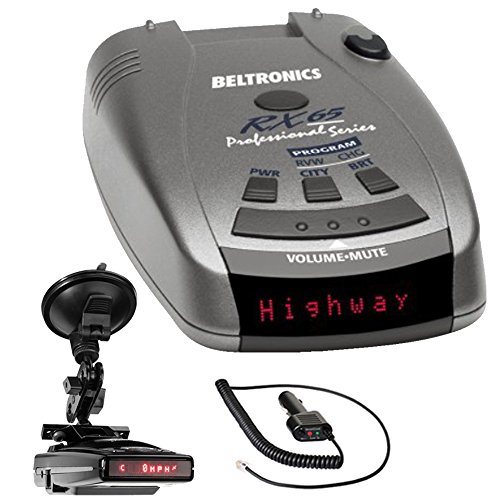 We reviewed the Beltronics RX65 in various factors

While the overall design of this radar detector is a bit outdated and looks like it is from the 90s, it has a solid construction. It offers a decent amount of heft, especially compared to many other models on the market that are far too light. And unlike many other radar detectors, there is no dedicated mute button on this one. The volume controls can be a bit tricky at first, especially if you are trying to use them while driving.

The RX65 offers detection of all radar frequencies, including X, K Superwide Ka, and even Instant-On.

These days X-band radar has become all but obsolete, but it is still sometimes used for highway traffic monitoring. This type of radar is more commonly used with microwave towers and the kinds of automatic doors that you find with larger chain grocery stores. It is recommended that you set this GPS to ignore X-band signals because of all the false alerts it causes.

While K-band radar is also sometimes used by police for traffic monitoring, these alerts usually come from automatic door openers and other innocuous sources. It’s also not uncommon to get K-band alerts when you are driving close to someone who is using a Cobra or Whistler radar detector.

Even some of the built-in safety features of modern cars can cause false alerts to occur on this band. Because police do still sometimes use K-band radar for traffic enforcement, it is important that you keep it enabled on your radar detector.

Ka-band radar is by far the most commonly used type of radar when it comes to traffic monitoring and enforcement by police. If you receive one of these alerts on your radar detector, there is a good chance that it’s coming from a police speed gun.

This radar detector is also capable of picking up on POP radar guns. It is important to keep in mind that if your car is targeted with one of these radar devices, you won’t have enough time to react. You may, however, be able to slow down in time if the vehicles in front of you are being targeted.

This is by far the most difficult type of radar for even high-end models like the RX65 to detect. If you receive one of these alerts, you should slow down immediately.

Another very useful feature that the RX65 offers is laser detection for both the front and rear of your vehicle. LIDAR or light detection and ranging are quickly becoming a common practice among police throughout the United States and Canada.

The part of this radar detector that faces the windshield features a laser lens and special antenna that is designed to alert you when a laser is pointed at the front of your vehicle.

The top of this device contains a port that picks up on lasers that are pointed at the back of your vehicle. This means that you will have complete protection from these laser devices no matter what.

For laser devices to be effective, they must hit your vehicle directly on the front or rear, so you won’t have to worry about being targeted from the side. Sometimes it is difficult for these laser devices to be detected if they are aimed low enough on a vehicle.

There are no false laser alerts, so you should take every alert seriously. If your vehicle has already been targeted, it is likely that you will be pulled over. It is possible for some alerts to come from scattered signals, which could give you enough time to slow down. 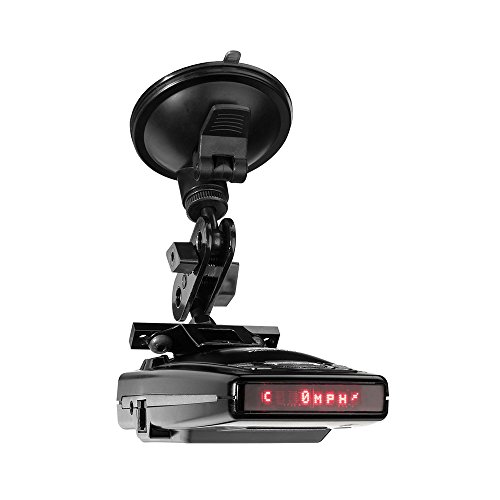 The ultra-bright display on this radar detector has an alpha-numeric design and offers four different brightness levels. There is Maximum, Medium, Minimum and Dark. You can select which one you want by pressing the BRT button until you have found the right one.

If you are using Dark Mode, you will receive only audio alerts and the flashing light from the SmartPlug. This is a useful setting if you want to avoid having your radar detector seen by anyone. The alpha-numeric design of the display means that you will see an “X”, a “K” or “Ka”, depending on the perceived threat.

You will also see a graph that will show you the strength of each signal that is detected. In the event of multiple threats being detected, the signal of the strongest one will be shown. You can change this if you want by going into the “Signal Strength Meter” section on the menu.

The Threat Display setting that this radar detector offers allows for multiple signals to be displayed simultaneously. You will see the letter that represents the detected band as well as a number indicating the signal strength. The band letters appear for just a few seconds after the audio alert, which can be useful for shorter alerts.

There is also the Tech Display mode, which displays the band that id detected as well as the frequency. If multiple signals are detected, the strongest signal one is displayed. This setting is ideal for more advanced users and can be quite useful.

There seven different settings in Program Mode that you can change to customize the overall performance of the RX65. The first setting is Pilot, which shows light to show that the device is powered on. There is also Voice, which allows you to enable or disable audio alerts. AutoMute turns down the volume of alerts whenever a threat is detected. You can also choose from three different City mode sensitivity levels.

You will have three different modes to choose from—AutoScan, Highway, and City. The AutoScan feature of this radar detector offers long-range threat detection. There is a signal processor in this device that is constantly looking for potential threats to notify you about. It automatically sets the sensitivity according to your driving environment.

The Highway mode is by far the most sensitive, and it can be very useful for when you are driving on the highway. When you set this radar detector to City mode, you will be decreasing its overall sensitivity. This means fewer false alerts to deal with. There are three sensitive levels to choose from with City mode.

The RX65 emits three different types of audio alerts depending on the type of threat that is detected. X-band alerts have a chirping sound, K-band is more like a buzzing noise, and Ka alerts chirp twice. The stronger the signal of a threat, the closer together the sounds get. Laser alerts produce a consistent tone. You can choose to enable voice alerts, which will tell you the nature of the alert in the form of a digital voice.

The default setting of this radar detector is to emit an audio alert whenever a potential threat is detected. The alert volume decreases after a few seconds so that you know about it without being bothered. You have the option of turning off this feature so that the volume does not decrease until the threat is no longer detected.

The mute-volume button will allow you to temporarily disable audio alerts. This only works for individual alerts, so the next one will emit an audio alert unless you press the button again. 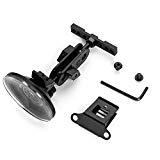 Installing the RX65 is a simple and easy process that only takes a couple of minutes. You should put the suction mount that comes with this device in the middle of your windshield. Make sure that you install it low enough that it can work properly. You shouldn’t put it behind tinted glass or your windshield wipers, as it will negatively affect its overall performance.

After you have plugged it in, you will want to turn it on by pressing the PWE button, which is located on top of the device. It displays any changes that you have made to the default settings, but there is a Fast mode option that can set to skip this altogether.

The overall performance of the RX65 is quite impressive. It is capable of detecting a wide range of signals on numerous bands. If you want to get the most out of this device, you should take some time to look through the settings. There are different modes that you can switch between depending on where you are driving. These modes perform well respectively, offering an effective way to avoid expensive traffic tickets.

One of the additional features that this radar device offers is protection against VG-2 radar detector detectors. This means that you won’t have to worry about law enforcement catches you with it. While most places in the U.S. don’t have any laws against radar detectors, there are a few states where their use is limited or prohibited altogether.

There is also the SmartPlug feature, which has a green light that glows when this device is on. The light turns red whenever a threat is detected so you won’t miss it. This feature can be especially useful when you are driving at night, as it is highly visible.

You have the option of switching out the SmartPlug with the Escort SmartCord, which will enable you to use the ESCORT Live mobile app. Those who have this app on their phones will be able to take advantage of the extensive threat database. This database is community-driven and updated regularly to include new threats, including red light and speed cameras. 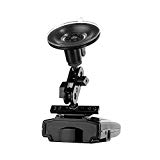 Make sure to check out the official manual for extra information.

The Beltronics RX65 can detect threats of different band frequencies. It also offers customization to optimize sensitivity on certain bands and general driving awareness. However, it lacks the added features that GPS brings such as marking speed traps, red-light cameras, and speed cameras.

If you are looking for a radar detector that you can rely on, this one is an ideal choice for several reasons. It has a very user-friendly design while still offering features for more advanced users. There are very few other models on the market that perform as impressively as this one.