Having a large and cumbersome dash cam won’t always guarantee your capture of thieves and suspicious individuals. To really sneak up on these unsuspecting criminals, you need something more subtle than that. BlueSkySea came out with a mini WiFi dash cam at the end of 2017, and three years later, it’s still a winning product. The key to the B1W dashcam’s success is the competitive price point. But what else does it have in store for consumers? 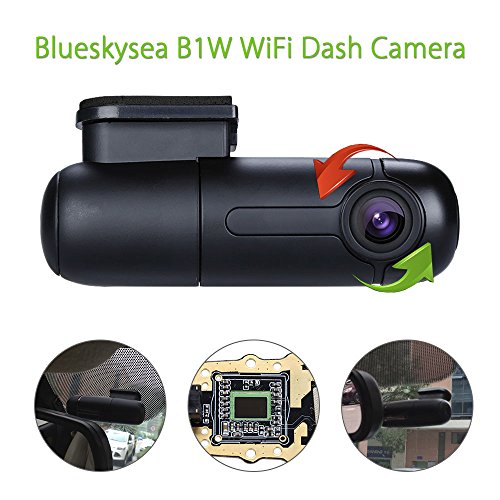 Due to the fact that it doesn’t have an LCD screen, this dash cam comes in a slim and compact design. Measuring at just 3.54”x1.14”x1.5”, the smooth black color also contributes to the stealthiness of the camera.

It won’t take up a lot of space on your windshield/dashboard. Although its almost non-existence could encourage more theft and vandalism, it does somewhat put your mind at ease to know that you will catch it all on camera.

The lack of an LCD screen also allows the camera to rotate fully at 360 degrees. Capture everything that’s happening inside or outside the cabin. With a 150-degree wide-angle lens you have a full view that spans three car lanes at least, recording everything that is going on on the road.

We should say super capacitors with the capabilities of this dash cam. Instead of a lithium battery, this tiny dash cam uses dual capacitors. The camera won’t overheat or turn off, making it the safer choice in a dash camera as it can handle higher temperatures much better.

Not a lot of the higher priced and more well-known brands have WiFi functions built-in. It usually costs a lot more to have this luxury. At such an affordable price, you can say this is a good deal! Blueskysea makes sure drivers can connect to the camera using their mobile devices with the compatible app. From your device you can share, download, and stream footage and change the settings of the camera as well. You can charge the camera while it’s in use with the car cigarette lighter socket! The app is compatible with both Android and iOS devices. 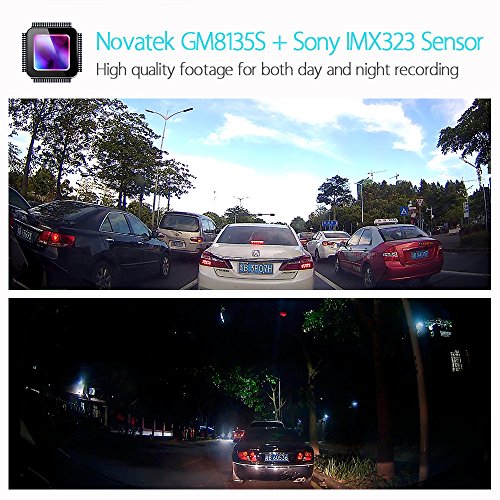 The Blueskysea B1W dash cam has parking mode function. This means your car is protected even in your absence. The camera is triggered by the G-sensor. Once any sort of impact or force is detected by this sensor, the camera automatically turns on the record 30 seconds of video. This allows you to feel safe and know what’s going on when you’re not with your vehicle.

For dash cams, you shouldn’t settle for anything less than full HD. Anything less than that won’t allow you to see all the fine details in the picture. With the Novak GM8135S processor paired with the Sony IMX323 image sensors, you get 1080p Full HD of high quality video. It works well to provide excellent picture day or night. Video quality is among the most important traits for a camera to have. After all, isn’t that why you got one?

We would strongly advise purchasing as SD card since one isn’t included in the box. This allows you to store up to 64GB of video footage. If you are afraid of not having enough space or forgetting to manually go in and delete older footage, then worry no more. This dash cam also has loop recording. THis means the BlueskySea B1W will automatically record over (loop over) older footage once the memory card is full. Never worry about not having crucial evidence to back up your case ever again.

Locked video footage (ones recorded when the G-sensor is activated) will be locked and kept safe. This ensures that the most important video footage is always kept in your card for easy access.

While the Sony IMX323 image sensor is found in a lot of dash cams on the market, the Novatek processor new to the dash cam game. The GM8I35S is usually found in surveillance cameras, much higher powered surveillance systems. The pair of them work together to provide you with excellent video quality even in low light conditions.

For the runt of dash cams, recording at 1080P full HD is an amazing feat. At the speed of 30fps and 12mbps, the camera can capture all the finer details other cameras might not.

It’s mounted to your vehicle with an adhesive mount. Some consumers claim a con of the B1W is the unsecure mount. However, it does offer 360-degree views of everything going on around you and is quite securely built.

You can control all the settings in the palm of your hand. WiFi also allows you to share and download video footage at your convenience.

If you live in an environment that has high temperatures and barely sees rain or a change in seasons, the dual capacitors are a much better and not to mention a safer option compared to traditional batteries.

It doesn’t have a screen, which could be a turnoff to some, but at such a good price, the B1W does come with a myriad of other important features such as WiFi and parking mode. Since it doesn’t have an LCD viewing screen, it has a compatible app for your mobile devices.

You can control all the settings in the palm of your hand. WiFi also allows you to share and download video footage at your convenience.

The button on the camera either locks the footage recorded with a short press or turns off the WiFi with a longer press.The B1W either comes with voice notifications on the camera’s status (SD card detecting, turning on and off, shutting down, etc) or you can substitute it with beeps or turn off notifications altogether. You can keep on top of things with regular firmware updates.

Other than the mounting, another con raised by consumers is the audio quality. The manufacturer of the B1W has since corrected this issue by replacing the microphone in subsequent models. 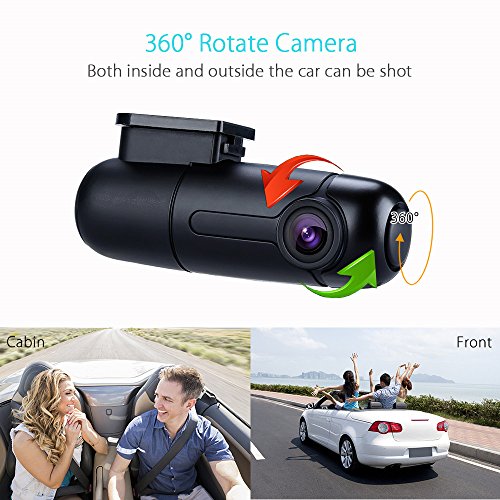 The bottom line is, we do believe this very affordable little camera is of great quality and has features that would suffice for the everyday driver. It’s not super fancy and doesn’t come with an LCD screen, but if you want a camera that’s reliable and has your back, the B1W will do!