Escort Solo S3 Cordless Radar Detector Review 2020
RRD is reader-supported. When you purchase through links on our site, we may earn a commission. Read more.

Cordless options for radar detectors are not aplenty. Not then, not now. Among those that exist, competition is stiff. The Escort Solo S3, which is the predecessor of the Solo S4, is among the most successful models of this kind to have been released.

It followed the success of the now fellow discontinued model, the Escort Solo S2, which boasted of a sleek case and multiple features. The Escort Solo S3 promised to improve those, including an upgrade to a tougher exterior, better display, and radar and laser detection.

If you’re here, chances are, you’ve found a great deal on the product, especially now that it is no longer on the official roster of Escort radar detectors. The following are things to consider before you make the final click to purchase: 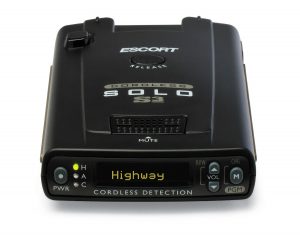 The Escort Solo S3 comes with a new black case, which is seen as an improvement on the S2’s platinum that can cause glares. The display has also been replaced with OLED, although this one is not much preferred over the LED because of issues with readability, especially in sunlit environments. It is backlit unless a button is clicked, an alert is triggered or it is plugged through a power cord, during which it will stay lit throughout.

The display will indicate the status of the battery as well as identified band and laser and respective strength. The detection of the different band types could be deactivated, and the range could be adjusted based on the driving mode.

There are LED indicators on the sides, as well as volume buttons and buttons for configuration of the radar detector. These are tiny and may cause a minor inconvenience for those with average to large fingers. The Escort Solo S3 reviewed here is also one of Escort’s products with a mounting problem.

It might be worth considering that its window mount seems flimsy to be supporting the radar detector and that its rattling can be a minor annoyance during your trip. You can buy a sturdier replacement, although it is, of course, an additional cost.

Many prefer corded radar detectors because of the convenience offered by not having to change and charge batteries ever so often unlike its corded counterparts. Escort Solo S3 remedies this by providing 2 AA batteries that would not be recharged until it drains after several months, cutting off the expense of buying new batteries (these are good for about 30-40 hours of driving).

It also has measures to save power, such as AutoPower which can be enabled so that it automatically shuts off once unused for hours. This is especially nice for the forgetful because it would keep the energy from draining even if you miss turning the device off.

You can also expect when to replenish your batteries through its low-battery system which alerts both through the display and audio. You can check the battery level by clicking the mute button. 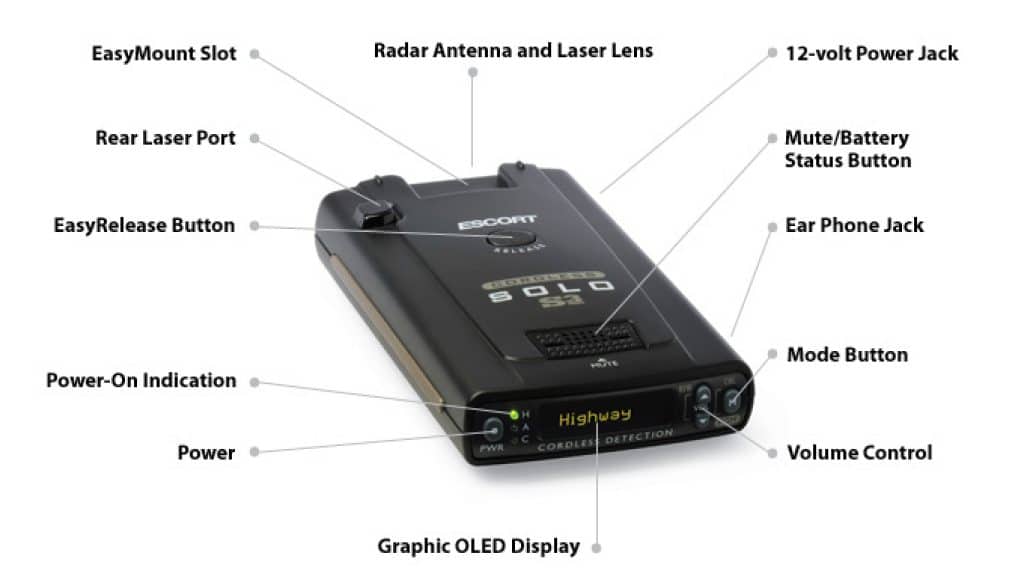 The Escort Solo S3 is capable of detecting all radar bands, which include X, K, and Ka bands as well as laser, and in all directions, although this is not as impressive as that of its corded counterparts because it prioritizes saving power above else. It is in fact at the fraction of most models, especially when it comes to the very common Ka-band, and does not offer the best protection to instant-on police equipment. Its performance though is among the best ones when it comes to cordless radar detectors.

It comes with the Escort-patented DSP which is also part of most of the company models for them to use the maximum possible range for the detector while minimizing the likelihood of detecting false alarms. There is no Traffic Sensor Rejection (TSR) however, which ignores the signals produced by traffic and anti-collision sensors.

Another way to make up for its compromised range detection is its ability to give alarms early on, giving you ample time to adjust your driving. This also helps in conjunction with the DSP to minimize the occurrence of false alerts.

Besides giving warnings on police radars and lasers, the Solo S3 can alert you of any road hazards and even other vehicles such as ambulances.

Similar to other radar detectors, you can change at least nine features on the device so that it can better fit your driving needs and style. These are remembered by the Escort Solo S3 so that you would not have to modify it again after turning it off.

Q: What are the included accessories on the Solo S3?

A: Accessories include a windshield mount with 4 suction cups (2 of which are extra), 2 AA alkaline batteries, a travel case, and an owner’s manual.

Q: Does the radar detector come with a SmartCord?

A: No, it is an optional accessory.

Q: Will I see an improved performance if I plug the Solo S3?

A: No, the machine is still mostly dedicated to conserving energy even when plugged in.

There aren’t many options available when it comes to cordless radar detectors. But of the few that can be purchased, the Solo S3 is among the best you could get for your money.

The Escort Solo S3 can accurately detect different radar bands and laser and can be moved with ease from one car to another. It is not as effective as other corded Escort models though and has to be charged every after 30-40 hours, which may be fine with frequent travelers.

There are better options there, but you may have to live with more wires on your vehicle. The Escort Solo S3 we overviewed is best for those who like the convenience of bringing it from destination to destination, and from car to car, especially when such a user wants to use it on rental cars.