Convenience, portability, and decent features — these characteristics best describe the Midland LXT500VP3 22-Channel FRS/GMRS Two-Way Radio. It’s lightweight and comes in a smaller size compared to most two-way radios in the same price range. Standing at just 6.16”, it is easy to put in your pocket, making it ideal for personal and family use. 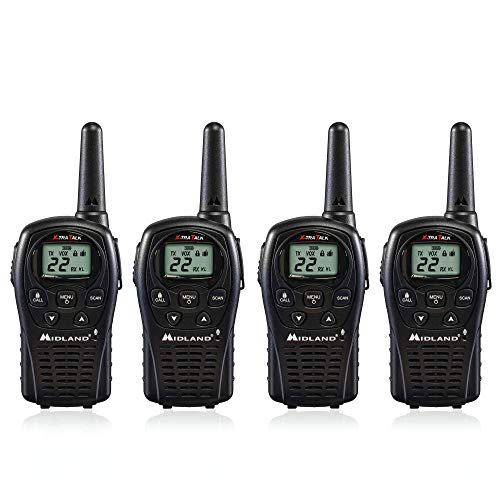 While its compact size makes for a fair selling point, this device may have cut back on a few functions and design aspects. Then again, Midland still packed the LXT500VP3 with a basic and practical feature set which should be enough for casual users. It provides a 24-mile range, 22 channels, automatic channel scan, silent operation, keypad lock, and adjustable power settings. While the LXT500VP3 may not be the best option for heavy-duty outdoor use, it’s a great device if you’re looking for something portable for family vacations or if you’re getting your kids to use a radio.

To give further details, this Midland LXT500VP3 review will take a look at the design, functions, positives, and negatives about this product. If you’re on a budget, this device can be a good fit as it retails for $40. Read on to find out if this is the two-way radio you need.

Here are the things included in the package when you buy a pair of these two-way radios:

Right off the bat, what you get in the box is pretty straightforward. You have the pair of radios and the standard inclusions, but no additional accessories like the earpiece.

The model is available in colors black, black/blue, and black/mossy oak camo. Designed for portability, it’s compact, lightweight and easy to fit in your pocket. It also has an easy grip and is comfortable to hold. The LCD screen has a minimalist black and white display that’s surprisingly readable even in bright sunlight. However, the screen is made of plastic which is likely to scratch.

A few flaws in the design can be found in the usability of the device. The buttons, for instance, are not very tactile compared to other two-way radios. When you’re using the Midland LXT500VP3, it’s kind of hard to tell if you’re pressing the buttons properly. This would be quite frustrating if you’re wearing gloves when communicating. Another thing, the Midland LXT500VP3 doesn’t use a standard dial as an on/off switch. The power button is actually the center button below the screen. This could throw some people off especially if you’re used to the usual way it’s done.

While there are minor hiccups in the design, they’re not necessarily deal-breakers if you want a straightforward radio that works.

The Midland LXT500VP3 has dual power options. You can either use the included rechargeable battery pack or 4 AAA batteries to power up this two-way radio. There’s no advertised battery life for the LXT500VP3, but the rechargeable batteries could last for about 12 hours of use so you don’t need to change batteries quite often unless you’re a power user.

Charging is easy as well because you don’t need to take the batteries out of the unit. Simply place the radios in the included charging dock and it will start charging the device for you. However, another thing worth noting is that there’s no display indication when the battery is running low – which would’ve been really helpful if you’re in a tight situation. Also, the charging dock has a red LED light to indicate that it’s charging, but it doesn’t change to green as it should to show that it’s full.

The Midland LXT500VP3 can cover an impressive 24-mile range with a clear line of sight. However, if you’re in a hilly area or on unpredictable terrain, it might only reach about a good 2-4 miles. This is the case with all two-way radios, even the expensive ones.

An automatic channel scanner is in place so users can easily determine which channels are in use. A negative point in this aspect is that this device doesn’t have privacy codes like most models such as Midland LXT630VP3 and the Motorola Talkabout T460. Although it’s a slim chance, your conversations can be heard by another person who’s on the same channel.

Control the transmission power output of the LXT500VP3 to your liking. High power output extends the range whenever you need it, and low power output does the opposite for battery conservation purposes.

By turning off all operation sounds such as call tones, you are able to set the Midland LXT500VP3 into quiet mode. You can use this for hunting or in other situations where sound is intrusive. 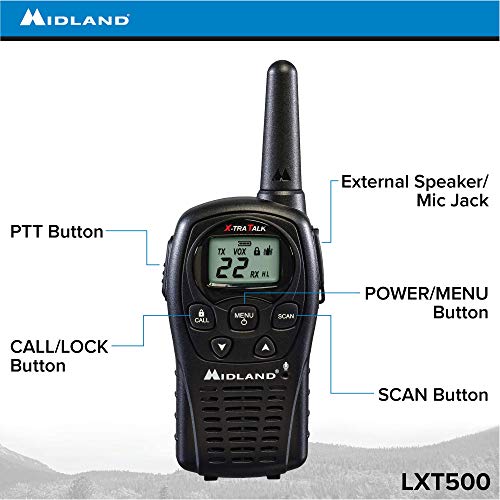 Since the Midland LXT500VP3 is most likely to be in your pocket most of the time, the keypad lock feature prevents accidental pressing of the buttons. You don’t have to worry about it changing settings or frequencies as it sits in your pocket.

The Midland LXT500VP3 could survive small splashes and light rainfall, but not water submersion. If a waterproof two-way radio interests you, the Cobra CXT 1035R FLT is a good choice.

While the Midland LXT500VP3 does provide the basics, the performance of this device could’ve been better in terms of sound quality and signal. Furthermore, there are some functions that are expected for the price, such as a flashlight and weather radio. 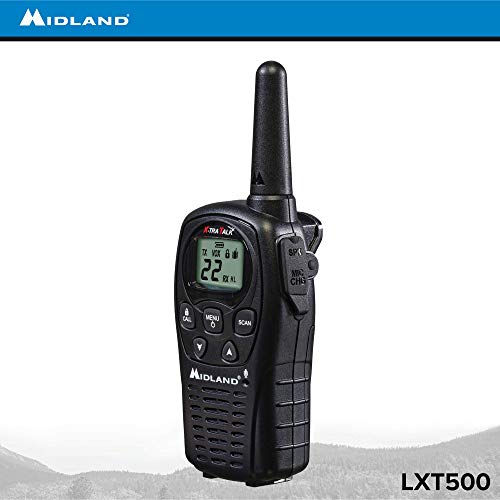 In a nutshell, the Midland LXT500VP3 is a nice two-way radio for personal and family use. It provides basic features including 22 channels, 24-mile range, silent operation, and dual power options. Despite some drawbacks, the LXT500VP3 is still a practical choice for anyone who needs a decent two-way radio.