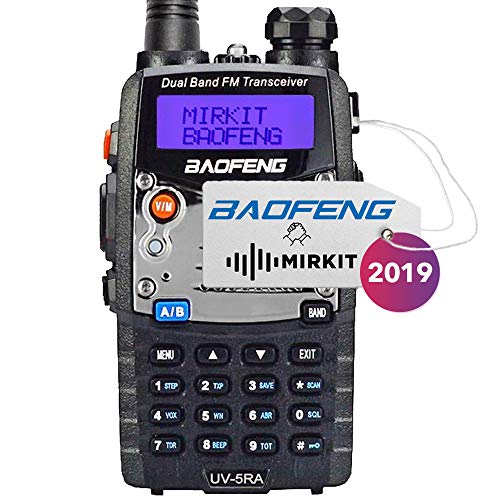 First off, the UV-5RA is part of BaoFeng’s UV-5R series, which is a chain of radios the company has released.  Essentially, radios in the UV-5R series only differ in their exteriors and radio firmware. But other than that, they’re mostly the same. The BaoFeng UV-5RA is a budget handheld radio you can take anywhere in order to communicate or listen to different channels, especially amateur radio. If you’re a ham radio enthusiast, then the UV-5RA is a perfect fit. Retailing at under $40, it provides 128 channels, an FM radio, LED flashlight, dual-band function, emergency alerts, and more. While the features are enough for casual users, you may want to look at the Midland GXT1050VP4 two-way radio if you want something more advanced. Then again, the BaoFeng UV-5RA is a reliable two-way radio for family use, emergencies, or just a personal device.

Before we proceed with this BaoFeng UV-5RA review, let’s first take a look at the inclusions when you buy this product.

With all that comes with the package, the UV-5RA certainly is a bang for the buck. Some mid-range radios don’t even ship an included headset, which makes it a pleasant surprise that the UV-5RA comes with more accessories for its price.

The BaoFeng UV-5RA has a plastic casing that’s not very durable compared to other devices. However, such is expected since it’s a budget two-way radio. The build is solid enough though, but it may not survive a sharp fall. Clearly, the BaoFeng UV-5RA is not meant for rough use. Nevertheless, it’s a pretty dependable radio when used as a back-up device or in situations where you don’t want to bring an expensive radio with you.

The tri-color LCD display is a bit small, but the keys are laid out nicely and are relatively easy to press. In terms of usability, this is a straightforward device that beginners can use.

With 128 channels and 50 privacy codes, you won’t have trouble finding a frequency for communication. If you wish to talk privately, you and the person you’re connecting with must be on the same frequency and have the same privacy code. This greatly reduces the possibility of a third party ‘walking in’ on your conversation. Note, however, that privacy codes don’t guarantee complete secrecy. If someone happens to be on the same frequency and privacy code, they will hear your conversation and can actually join in. Nevertheless, that’s still a very slim chance with the options you have.

Dual-Band, but not Dual Watch

A dual-band function allows operation on two different frequency bands, namely UHF and VHF.  While it’s true that you can monitor two frequencies on the BaoFeng UV-5RA, you can’t tune in to both channels at the same time. If both channels are active, the UV-5RA will only lock on one of them. Furthermore, you won’t be able to transmit on the idle band when you’re tuned in to an active channel. In short, the BaoFeng UV-5RA has a dual-band function but it doesn’t allow dual watch, something that is usually included in radios with dual-band.

That being said, if what you’re after is just clear communication and dual-band is not something you really need, the UV-5RA is a great Baofeng budget radio for the purpose.

This comes with 1800 mAh Li-ion battery, which lasts a bit longer than the typical NiMH batteries other two-way radios use. Compared to the 6-8 hour battery life of many NiMH battery packs, the UV-5RA can operate for 12-14 hours. This is essentially a positive since battery life is one of the major user concerns when it comes to two-way radios. Nevertheless, should you require a lengthier operation, you can always replace the included battery with something that has a higher capacity. But if you want a similar model, try the BaoFeng BF-F8HP. 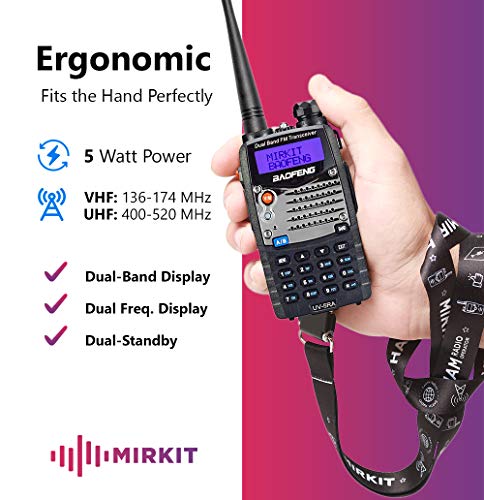 Like most users, we always keep an eye on our battery usage when using two-way radios. A nifty technique that most devices have is the ability to operate on different power levels. When you choose a high-power setting, you increase your transmission range and use up more power. On the other hand, operating in a low setting conserves more battery yet shortens the transmission range. The pair can adjust to your preference, whether you want to transmit at 1 watt or 4 watts.

You can manually program the BaoFeng UV-5RA through the keypad. But as with any two-way radio, there’s a bit of a learning curve with manual programming. If you want to take the easy route, I recommend you purchase the separate programming cable. It comes at only $8 and makes programming through your computer a breeze.

It may have a simple feature set, but I’m glad that they included a flashlight. Not many budget radios have one, and some mid-range ones are missing this feature as well. A flashlight on your two-way radio will be extremely helpful during outdoor low-light conditions. You can use it to find your way in the dark or even as a distress signal. 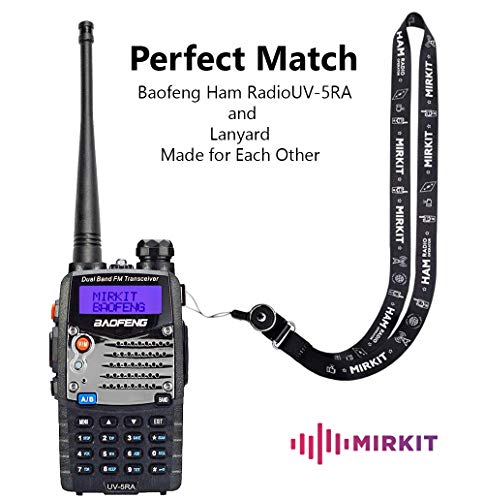 The TYT MD-2017 is another well-received two-way radio you might want to check out.

William
William Johnson is the owner and founder of RatedRadarDetector.org. He writes about car accessories, with his passion stemming from a deep enthusiasm for all things automotive. His website, RRD, focuses on in-depth reviews of car accessories to help people find the best and latest products in the market.
Latest posts by William (see all)
BaoFeng UV-5RA Review
William Johnson
8 Total Score
User Rating: Be the first one!