Amateur radio or ham radio is a popular means of communication used for various purposes including public safety, emergency communication, wireless experimentation, or just friendship among enthusiasts. Ham radio operators, more commonly known as hams, have conversations and broadcasts over a wide frequency spectrum that’s accessible around the world. While many hams operate for recreational reasons, amateur radio is a useful communication tool during emergencies and natural disasters so people can call for help or pitch in with information spreading. If you’re already an amateur radio enthusiast or even if you’re just beginning, a transceiver like the Xiegu G90 is the most important thing you should invest in to be able to transmit and receive signals in the amateur bands. 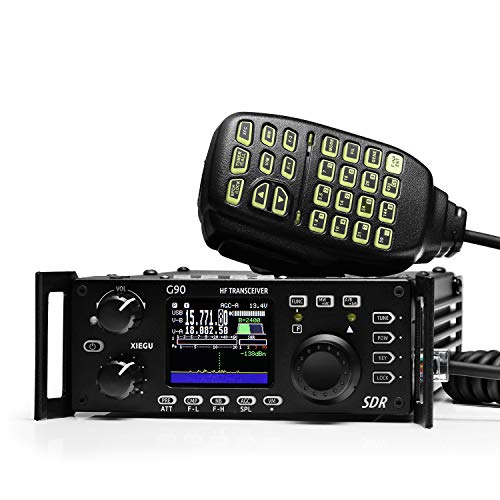 The Xiegu G90 20W HF SDR Amateur Radio Transceiver is a high-performance device with a configurable interface that you can set according to your needs. It provides 0.5 to 30 MHz coverage, 20 watts maximum power output, a built-in antenna tuner, excellent audio, and responsive customer service support. Xiegu G90 is actually the first model in Xiegu’s G-series. While it’s packed with features you’ll love, there’s still room for some improvements which will be further discussed in this Xiegu G90 review.

There are quite a lot of things worth discussing in terms of design. First off, you’ll find that the Xiegu G90 is portable, yet it can be quite heavy at 2.2 lbs. This is not a handheld device though, so if you’re looking for something to use on the road, consider the Icom ID-51A transceiver.

Going back to the G90, one of the distinct qualities of this transceiver is its detachable faceplate. The head can be separated from the device’s main body and placed remotely if you desire.  This allows you to be more flexible with positioning the G90 so you have extra freedom.

The ham radio has a 1.8 inch TFT LCD screen. It’s actually bright and the details are highly visible both in daylight and in the dark. We love that the information displayed onscreen contains just about everything you need to know at a glance – power meter, mode, signal level, input voltage, volume, receive bandwidth display, and even the waterfall display. While that is a big positive for the Xiegu G90, the screen could’ve been a bit larger to give the information some room to breathe.

All the basic operational buttons on the ham radio are located at the front panel and top edge. Mode and band switching buttons are found at the top, while a number of functional buttons are on the front panel. There are three knobs on this device: the volume knob, multi-function adjustment knob, and the main VFO knob. Almost every basic task can be done straight from the available buttons, making it direct and easy to operate.

The Xiegu G90 is a shortwave (HF) radio that can receive frequencies at 0.5 – 30 MHz and transmit between 1.8 to 29.999 MHz. You can listen to AM, FM, CW, and SSB. You can hear local and international news broadcasts, air-to-ground communications, utility stations, pirate radio broadcasters, and of course, ham radio.

The antenna is no longer a problem with the G90. The built-in automatic antenna tuner ensures that you achieve the optimum performance by improving the transfer of power between the antenna and the transceiver. While other ham radios may need a separate antenna tuning unit, the Xiegu G90 transceiver already has one integrated with the device.

The included microphone is not just your plain old microphone. Xiegu G90 has a multi-functional digital microphone that has a complete numeric keypad, mode buttons, and programmable buttons that allow you to directly operate the transceiver without touching the front panel. So if you’re holding the microphone on one hand, you don’t have to use your other hand to operate it as there are buttons on the mic itself that you can use. However, a missing function with the G90 is the ability to record audio, a feature present in other transceivers such as the Yaesu FT-450D. 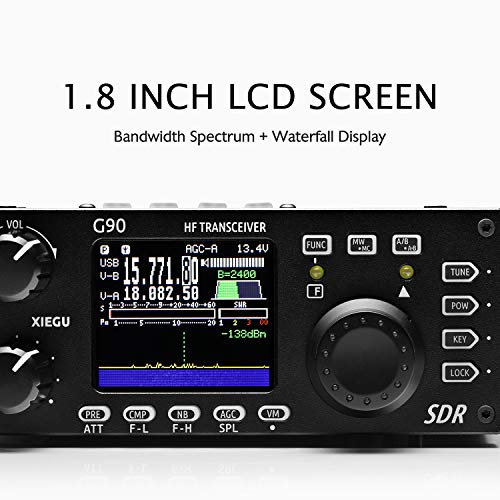 To add to the user-friendliness of the model there’s also a custom user menu or a “quick menu” which lists functions that are often used. While the buttons on the transceiver’s body are enough to perform basic tasks, the quick menu can also be utilized as a shortcut to execute frequent commands.

Audio quality on the Xiegu G90 is superb. This is one of the most notable things about the device when you use it for the first time. Both transmissions and received audio have a clear quality. Communication is made much easier on ham radio and there is little to no bleed in close signals.

You’ll find that the Xiegu has one of the most supportive customer services out there. When there are user requests and criticisms about the G90, the manufacturer listens and accommodates the changes. For instance, the earlier releases of the G90 did not have a CW decoder in it. When users started pointing it out and requesting the feature, the manufacturer made it available on the next firmware update. Bugs are fixed, functions are improved, and the general operation keeps on getting refined.  In addition, there’s a Facebook group you can join to get additional help. 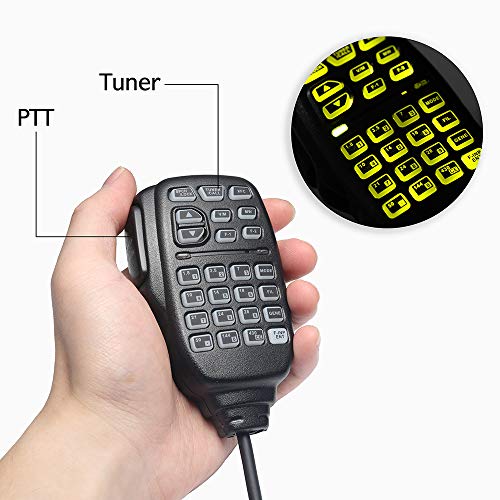 Portable and easy to use, the Xiegu G90 is a fantastic transceiver choice for amateur radio enthusiasts. It has excellent audio quality, great range, a built-in antenna tuner, a multi-functional microphone, and a feature-packed interface. Combined with supportive customer services, it is a worthy investment.