As amateur radio continues to flourish, so has the electronics industry that produces scanners and transceivers that allow access to the airwaves. Kenwood is one of the reputable companies when it comes to radios, and it definitely earned its excellent standing among ham radio enthusiasts. In this article, we’ll be taking a look at one of their best handheld devices, the Kenwood Original TH-D74A Tri-Band Ham Radio. It is one of our picks for the best ham radios available in the market. 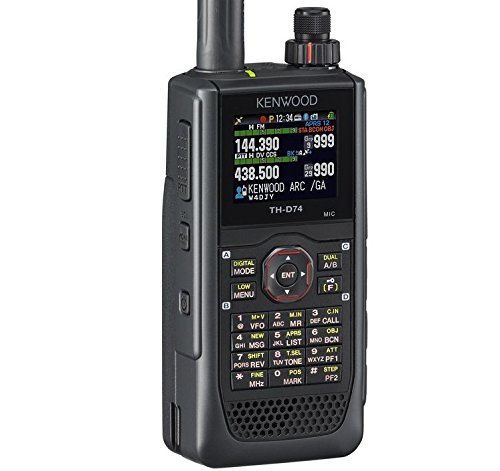 Even at first glance, you could tell that the Kenwood TH-D74A is a modern and deluxe device. Well, it certainly fits that description and more. Aside from having the features expected in advanced ham radios, the Kenwood TH-D74A also has functions that are a first in the industry. Equipped with APRS and D-Star compatibility, the TH-D74A has taken ham radio operation to another level. Along with tri-band functionality, built-in GPS function, DSP processing and recording, and Bluetooth support, this is a radio that intermediate and advanced users will enjoy.

Though it has a pretty steep price, you essentially get what you pay for. If you’re willing to dish out more bucks for a ham radio with a robust feature set and superb performance, then this is a perfect choice.

What’s in the Box

The Kenwood TH-D74A has a rugged yet simple design. It’s handheld and lightweight, so you won’t have any problems carrying it around with you. Right off the bat, this ham radio feels sturdy and made with high-quality materials. The color transflective TFT LCD display uses both reflective light and backlight for optimum visibility, so you can read the screen easily in daylight or in the dark. The main screen layout is also well-organized, unlike the Xiegu G90 that has an overcrowded display. Also, the TH-D74A has pop-up screens that indicate mode and functions so you’re never lost.

Instead of NiMH batteries typically used in handheld radios, the Kenwood TH-D74A has a 1800mAh Lithium-ion battery. It can last up to 15 hours, but this naturally depends on usage. If you want to conserve battery life, lower your power output and turn off any advanced features that may be using too much power.

You can set the power output into four different settings: 0.05, 0.5, 2, and 5 watts. Other radios only have 2 or 3 different power settings, but the TH-D74A ups the ante with an additional option.

One of the highlights of this ham radio is the built-in APRS feature. APRS enables you to have real-time two-way transmissions using packet communications. Simply put, you can exchange messages, GPS coordinates, and weather updates. You can send text messages using your Kenwood TH-D74A either by selecting a message template or inputting text using the panel keys. With the data you can exchange, you can be sure that your info is accurate and timely. Ham radio operation has never been this enjoyable

D-Star is the amateur radio communications network that uses digital voice and data protocol for ham radios. It’s like using both radio frequencies and the internet on your device. With D-star compatibility on the device, you can go online, send messages, and assess call signs. This function is a bit rare, and the TH-D74A is one of the few radios that has it. Icom ID-51A Plus2 is another handheld radio that has D-star compatibility. 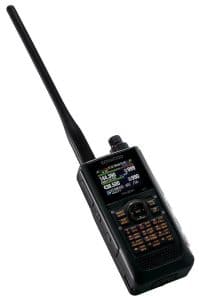 Bluetooth compatibility allows easier radio programming, mobile connectivity, KISS mode TNC access, and use of external APRS software. You’re also able to insert a micro-SD into it, allowing you to store a massive pool of audio recordings, GPS coordinates, and more. The flexibility you have with the Kenwood TH-D74A is amazing compared with other rigid models with limitations.

DSP voice processing is essentially an audio equalizer that significantly improves the sound quality. You can adjust this according to your preference. Consequently, voice recording is possible on the Kenwood TH-D74A. However, you have to choose beforehand between A and B as to which band you want to record instead of the device simply catching the sounds played by the speaker.

Another thing worth touching on this Kenwood TH-D74A review is the audio quality on this device. Kenwood prides itself with Kenwood Sound, their signature standard when it comes to audio. Audio is crystal clear and calls are effortlessly heard. Definitely, Kenwood’s years of experience in audio engineering is tough to beat.

To further ensure clear reception, the device has a built-in IF receiving filter that reduces interference. The IF filter diminishes interference signals in SSB or CW receptions, guaranteeing easy listening at all times.

On top of the rich features of the Kenwood TH-D74A, it’s extremely reliable in rough situations. It has an IP54/55 rating, meaning its dust and water resistance are at high levels. If you’re going to take it outdoors, for example, it can survive rainfall and water sprays.

Note: The model has a steeper learning curve compared to other radios. If you’re a total beginner, try the BaoFeng UV-5RA ham radio.

Feature-rich and durable, the Kenwood TH-D74A is a high-performing ham radio that ticks all the boxes. It offers modern features like APRS, D-Star functionality, Bluetooth compatibility, excellent audio, and more. If you’re willing to spend on an extremely reliable and functional device, you can’t go wrong with it.

You’ll need a license to operate the Kenwood TH-D74A, though. Don’t have one yet? Check our comparison of the best ham radio courses online.