When it comes to radios, Uniden is always one of the resonant brands that people trust. Uniden is basically synonymous with quality radios, making it popular with many enthusiasts. In this article, we’re going talk about one of their SSB CB radios, the Uniden Bearcat 980. 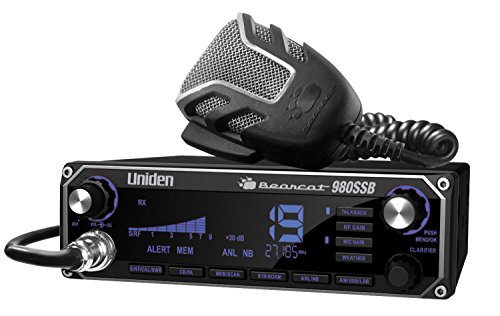 Although compact in size, this small device packs in quite a number of features that radio enthusiasts will love. It has a color-changing display, noise-canceling microphone, weather channels, and SSB frequency stability. Despite the online talk that CB radios are dying due to the advent of phones and tablets, they are still alive and proving their value for communication. After all, there are many places where you can’t get phone reception at all. If that’s the case, how will you talk to your team members (if for example, you’re in a convoy) or ask for help in emergency situations? That’s where CB radios come in handy.

In this Uniden Bearcat 980 review, we’ll see how this device delivers in terms of design, features, and performance.

What’s in the Box

For starters, the Uniden Bearcat 980 is compact in size, making it easy to install in your car. Modern car owners will appreciate the proportions of the BC980, as it’s sleek and fits nicely. Though it’s bigger than the palm-sized Radioddity CB-27, the BC980 would give you no problems in mounting. It’s not handheld like the Midland 75-785 though, just something to keep in mind.

The knobs and buttons on the Uniden Bearcat 980 are nicely laid out, and everything has backlit text so you’re never confused when operating in low light conditions. Another thing to like about the design is that the control knobs feel nice to operate, establishing that smooth interaction between user and device.

But the real highlight of the design is the LCD display. Instead of the generic black and white, Uniden Bearcat 980 SSB offers you seven colors to choose from, including red, purple, blue, and green. You don’t have to worry about night-time operation as well because the LCD is backlit and easy to read in sunlight. The display is dimmable, too – an option that’s not available in many CB radios. In terms of design, Uniden did a really great job of keeping buyers in mind.

As for the included mic, the design is pretty cool and reminiscent of the Transformers look. In the photos, it looks nice and pro. However, it feels plasticky when you get to hold it in person.

As with other CB radios, the maximum CB output is at 4 watts. For the AM and SSB, you’re getting about 10 watts and 15 watts peak, respectively. Although that may be enough for some, many power users find the output to be a bit second-rate compared to other radios.

On the other hand, receive on the Uniden Bearcat 980 is great. Some CB radios have a problem with oversensitivity, but the BC980 doesn’t give you the same issue. Don’t get me wrong, sensitivity on this device is pretty spot on right out of the box. It just performs better than others as you can hear incoming stations loud and clear. Granted, you would hear some noise when you’re in an area with much electrical interference going on, but that’s just nit-picking considering what the BC980 brings to the table.

Easily one of the best things to discuss in this Uniden Bearcat 980 review is the SSB stability. While other SSB radios may require repeated twiddling with the clarifier, the BC980 works just fine without much adjustment. You get to tune in to every channel crystal clear without anything bleeding over. Frequency stability on SSB is extraordinarily well-maintained, thus establishing that the Uniden Bearcat 980 lives up to its purpose. If you’re an SSB fan, the BC980 is an absolutely great fit.

Along with the 40 CB channels included in all CB radios, the Uniden BC980 allows you to listen to weather channels as well. There are 7 NOAA channels on the BC980 so you can stay updated on any incoming storms and harsh weather conditions. Getting first-hand info on weather forecasts allows you to prepare especially if you’re on the road and far from home. All types of users will find weather channels handy to know if it’s safe where they’re going. 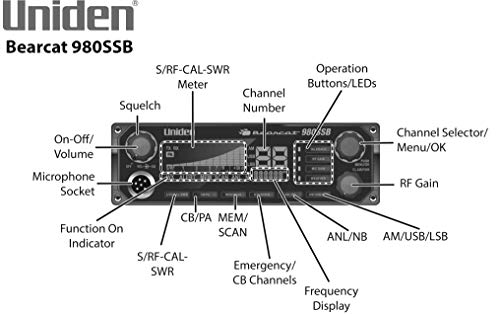 One of the few drawbacks in the Uniden Bearcat 980 SSB is the lax microphone performance. Although the microphone has an appealing design, it doesn’t produce the solid audio I was expecting. The microphone has noise-canceling features that help reduce the noise when you’re transmitting, but it could do with some improvements in terms of audio quality. If you’re a power user, I highly recommend replacing the microphone with something that can perform better. Use the 4 pin to 6 pin adapter included in the package. Going wireless is another option, too. The Uniden Bearcat 980 is compatible with the BC906W wireless mic and speaker, giving you more freedom to move when using this CB radio.

To ensure quality transmissions, the Uniden BC980 has an automatic noise limiter and a noise blanker. The noise limiter works to reduce external noise while the noise blanker lowers the interference from the vehicle’s ignition system. With these functions in place, clear communication is guaranteed. 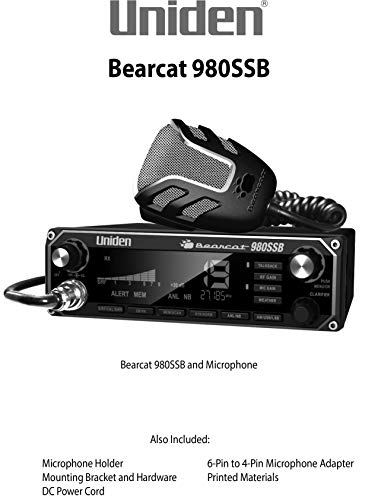 If you want a well-designed SSB CB radio with a competitive feature set, go for the Uniden Bearcat 980. It provides SSB frequency stability, a 7-color LCD display, weather channels, and good sensitivity. Despite some drawbacks on the microphone’s quality, the Uniden Bearcat 980 gives solid performance overall.