Known by many as the best dashcam on the market, the 4K DR900S dashcam is nothing short of impressive. It constantly gets 5-star ratings across the board and includes all the premium features one would want. It’s been almost two years since its initial release, and it is still one of the best-selling dashcams out there with more and more satisfied customers. It does cost quite a bit more than the other dash cam options, but it’s worth it and we’ll tell you exactly why. 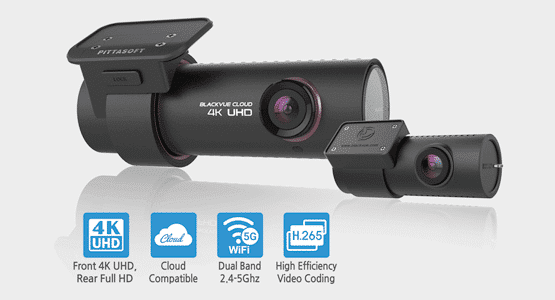 With the mention of 4K, you can expect clear details and perfect picture on the road. The imaging in the daytime is unsurpassed by any other model. There is no loss of optical clarity in different lighting and that can be proven with the many many test videos there are out there. Since it is a dual dash cam, there are two different lenses – one facing the back and one facing the front. The front dash cam, which is where footage capture is the most important, records at 4K. However, the rear dash cam is at full HD (1080P). It’s still clear enough to capture anything that could graze your car from behind. The front cam features an 8 megapixel sensor while the rear cam the superior Sony Starvis sensors.

Having WiFi capabilities in a dash cam means file sharing, streaming and downloads. With the 802.11ac at 5GHz the Blackvue DR900S offers faster speeds of streaming, downloading and sharing. With each firmware update there are new abilities added. There is now an update that allows you to choose the streaming playback quality for faster loading time.

It’s a dual dash cam, meaning it can capture what is going on behind and in front of you. Accidents and mishaps don’t only come from directly ahead of you, there are times when people miss crucial evidence because they were hit from behind. With 4K views in front and the same top-of-the-line camera from the DR750S for the rear cam, you will be able to capture, save and stream all crucial details on the road.

The wider angle in the DR900S’ front camera is able to take full advantage of the 4K Ultra HD resolution. You get wide angle views of at least 3 car lanes in front and the rear camera records at a 139-degree angle. The low lighting and nighttime street views will still be ultra clear on video. With the compatible app you can view all the saved video footage via your windows computer system, iOS, Mac OS, or Android device. 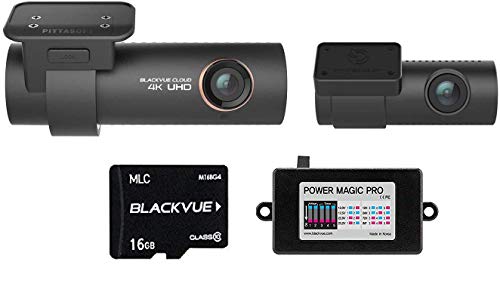 As a basic feature in most webcams, the Blackvue DR900S cannot be without parking mode and built-in impact and motion detectors. When you’re driving or when the car is parked, the dashcam is capable of detecting impact, movement and changes in speed. The bumps or jostles activate the camera’s recording function even in your absence and the files are saved and marked for you to review.

One thing that sets this camera apart from the rest (other than the incredible performance and capabilities) is cloud services. One of the only devices that is able to provide remote log-in to view live or previous footage. All you need is cellular connection. This makes it infinitely more convenient to monitor your vehicle.

Like we said, the Blackvue DR900S has every feature you would want, including GPS. This allows you to record your speed and location or to track your vehicle. Better understand your driving habits and avoid roadblocks or heavy traffic routes ahead of time.

With live view, you can see what the camera sees on your screen. This is useful if you aren’t in the car and your child or significant other is at the wheel. With the mic and speakerphone, you can get in on the action and speak to everyone inside the cabin. Not only is this useful for personal reasons, if you have a trucking company or a fleet of trucks, communication can be easily accessed.

To save space on your limited SD card, the new Blackvue has also incorporated a new compression algorithm (H.265). What it does is it compresses video files. If you think 1080P video files are large, think of how big one with 4K resolution would be. The dash cam shrinks everything down so the 4K file sizes are the same as Full HD!

With all the basic and fancy features, we must say the Blackvue DR900S is most likely the best dash cam out there. It’s a step up from the also impressive Blackvue DR750S with a few improvements including 4K resolution. It was the first true 4K dashcam and led the industry to new heights. New innovative technology was invented just to keep up with this amazing frontrunner.

What makes it even better is that with each firmware update, bug fixes and new features take place to make the camera better than ever. It has recently come out with time-lapse mode and previous firmware updates solved the temperature issue. 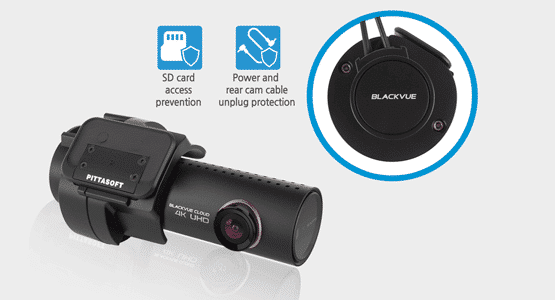 There are literally hundreds of dash cam options out there and some with many features the DR900S possesses. With such a high price tag, is this camera really worth it? What makes it worth it is of course the amazing capabilities but also the reliability. Blackvue has consistently introduced quality products and the DR900S is no exception. It has earned the title of “best dash cam on the market” not only through its features but also through consistency and the constant upgrades and improvements.

Why not purchase something impressive rather than saving some cash on a product that might not come through for you when it counts?